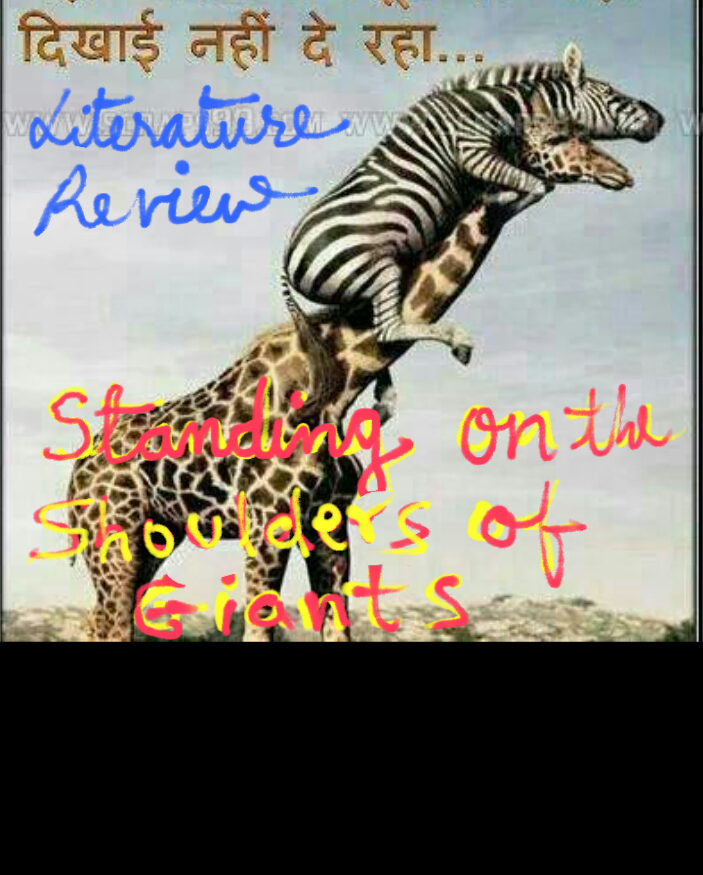 The Examples of Literature Review:

Important Steps in the Process of Literature Review
1. Make a table of all works reviewed or considered for review
2. Annotated Bibliography of selected works: It can be in chronological or alphabetical order.
3. Reorganise the 'order': Your 'hypothesis' shall guide you in reorganizing. This re-ordering depends on the flow of your arguments. Make your own trajectory.
4. Now write introductory and concluding lines. These lines shall be written to 'hook paragraphs' with each other. Write in such a way so the 'transitions' from one paragraph to another helps the 'flow of ideas'.
5. Now write 'Concluding Paragraph' of the 'Review of Related Literature'. Start with clear, strong and concrete statement. Make your conclusions about your 'Literature Review'.
6. Now, write 'Introduction'. The thesis statement shall be 'last' in the Introduction and 'first' in the Conclusion.

Video recording of the sessions on 'Literature Review'

Part 2: What, Why and How of Literature Review:

Worksheet: Screening Movie The Da Vinci Code based on novel by Dan Brown

Narration:
o   What is suspense thriller?
o   Have you come across any novels by Sidney Sheldon?
o   Have you watched any film by Alfred Hitchcock?
·        Central Theme:
o   What is conspiracy theory?
o   What is conspiracy fiction?
o   What is Mary Magdalene's role in the history of Christianity.
o   Feminine sacredness:
§  “The power of the female and her ability to produce life was once very sacred, but it posed a threat to the rise of the predominantly male Church, and so the sacred feminine was demonized and called unclean.
§  It was man, not God, who created the concept of 'original sin,' whereby Eve tasted of the apple and caused the downfall of the human race. Woman, once the sacred giver of life, was now the enemy."
§  “This concept of woman as life-bringer was the foundation of ancient religion.”
§  “Sadly, Christian philosophy decided to embezzle the female's creative power by ignoring biological truth and making man the Creator.”
§  “Genesis tells us that Eve was created from Adam's rib. Woman became an offshoot of man. And a sinful one at that. Genesis was the beginning of the end for the goddess."
* "It's important to remember that the ancients' view of sex was entirely opposite from ours today. Sex begot new life - the ultimate miracle - and miracles could be performed only by a god. The ability of the woman to produce life from her womb made her sacred. A god... It's a deeply sacrosanct ceremony".

While watching the movie The Da Vinci Code, keep an eye on following questions:
1.     Compare the beginning of the Novel and that of the movie. What difference do you notice? Which narrative seems to be more effective? Give your reasons.
2.     How is Christianity challenged in novel? What sort of religious controversy is discussed?
3.     Which truth from the life of Jesus Christ was buried and constant attempts were made to hide some facts? WHY?
4.     Da Vinci’s painting is symbolically observed by symbologists like Leigh Teabing and Robert Langdon. How do they read symbols? What do they deconstruct in the process of re-reading Leonardo Da Vinci’s painting?
5.     Explain the symbolism in ‘Holy Grail’? How is this symbol re-interpreted in the novel by Dan Brown?
6.     Concept clarification: Watch carefully to understand following terms:

This blog is for those students/scholars/teachers who are preparing for UGC (now CBSE) NET (English Literature) examination. The students of the Department of English, M.K. Bhavnagar University have prepared these online tests. All those who appear in this online test will get their grades with right answers in email. Scroll down for important links to know more about NET exam dates, notification and paper pattern.

You are requested to inform on dilipbarad (at) gmail (dot) com for grade-sheet after appearing in the test.

Please give correct email id, if you want to receive correct answers of these quizzes.

Quizzes on Literary Theory and Criticism:

Quizzes on Literature in English:
Please do not hesitate to write on above given email id, if you face any problem and report errors and omissions.

The students of the Department of English are studying Chetan Bhagat's 'One Night @ The Call Centre'. They (especially Ajay Jajeda, Avani Dave, Deepti Joshi, Hirva Vora, Riddhi Jani and Nidhi Kunvarani) actiely participated in the talk via Google Hangout on Air.

Chetan Bhagat is quite a controversial write in the gallaries of canonical literary studies. Thus, he arouses quite contradictory reactions. There are people who are die-hard fan - and there are who do not miss a chance to attack him. View this wonderful video where the author meets the hater:


There were interesting debates on news channels regarding Chetan Bhagat's new book 'Half Girlfriend'.
Here are videos of those talk-shows:

(Nepathya - Aside)
Isn't the success story of Chetan Bhagat the success story of capitalism? The Capitalism functions on one mantra: 'Under the garb of Freedom, encash everything!" Turn everything into commodity, market it, create buyers and earn money. Be it faith or literature, market it like beverages and skin whiteners; and see the tamaashaa! Those who are not surprised to see the rising demand of Ganesh Pandals, are not surprised to see rising demands of Chetan Bhagat; as they very understand the market phenomenon in capitalist societies. However, the question is: "Are those who are surprised at Chetan Bhagat phenomenon, surprised or shocked at rising marketing and commodification of rituals/faith? (last two videos and this note updated on 29 Aug 2014)

There was an interesting discussion on 'What makes for a canonical writer?' on ELTAI Literature SIG. Let me share some of the observations which were discussed on this thread: (To give due respect to the originality of all the contributors, their views are copy-pasted retaining font size, type and colour as they designed them :) )

Some people say that Chetan Bhagat is not an "established writer". Some others say that he is not a literary author.
All the students of Semester 4 (New Literature Course) are suggested to post thier views on how enriching it was to listen Prof. Juneja - on Google Plus Community of our Department or as comment under this blog.

Do not miss to review following writeups on Chetan Bhagat: