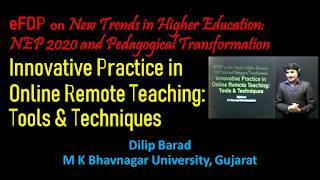 Video Re ording of the Session by Dilip Barad

Global Literature in the Time of Pandemic: Gujarati Sahitya Parishad

Global Literature in the Time of Pandemic: 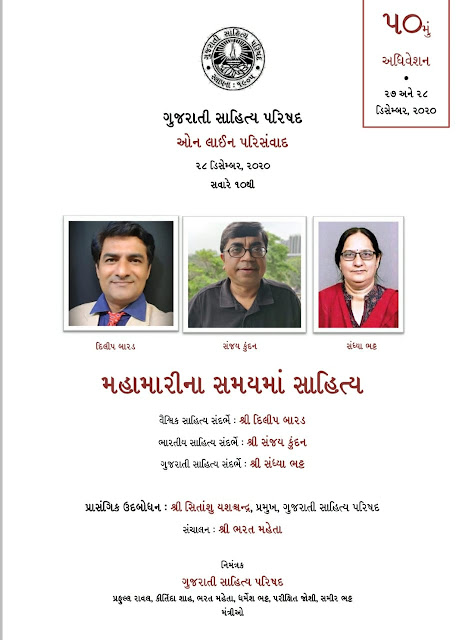 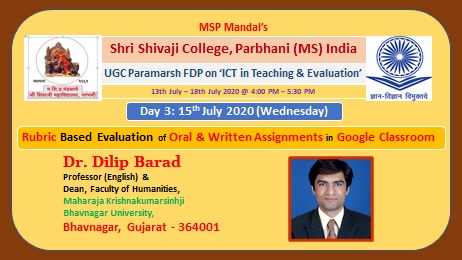 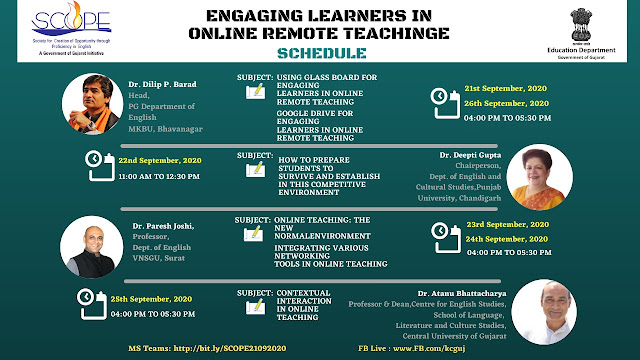 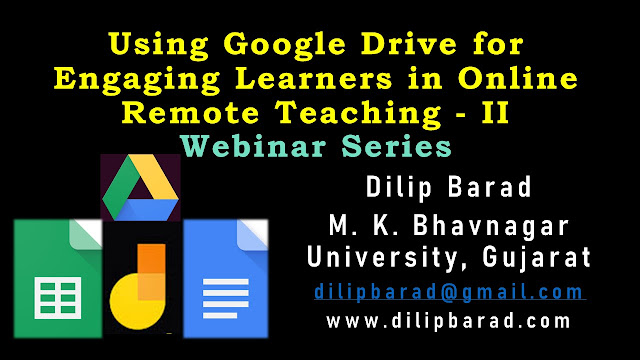 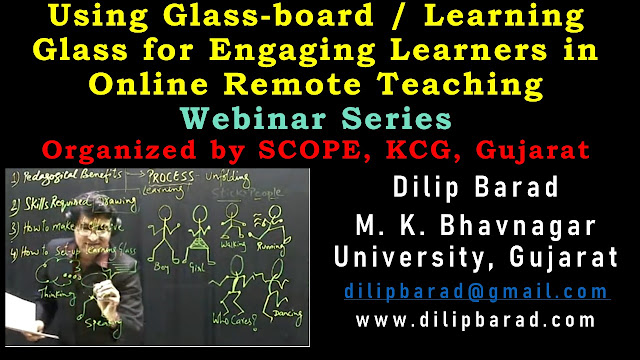 Role of ICT in the Development of Online Courses

Regional Institute of Education (NCERT), Bhopal (Madhya Pradesh) organised a Workshop for Planning and Development of Course Material for a Certificate Program in Communication Skills in English for the Western Region: 24 to 28 August 2020. 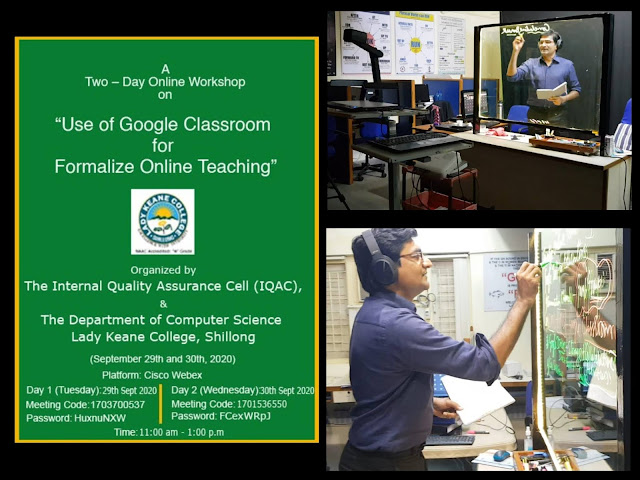 Video Recording of the Online Sessions 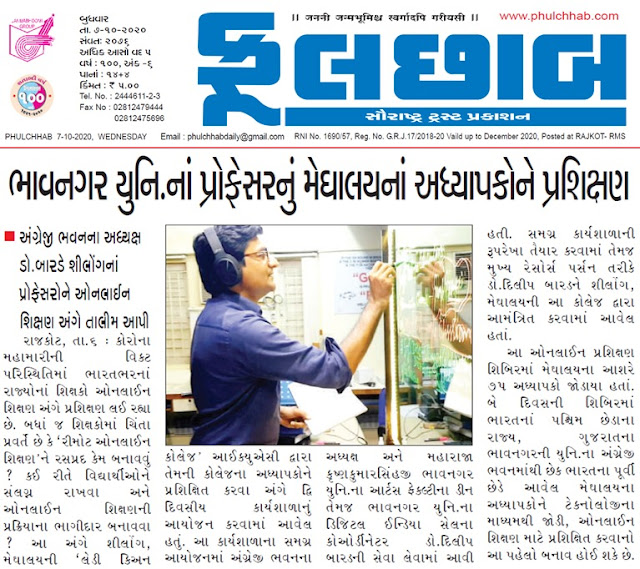 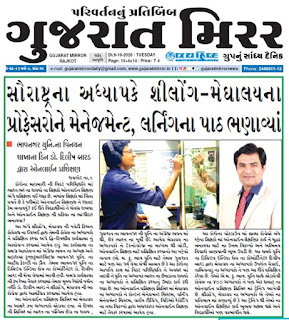 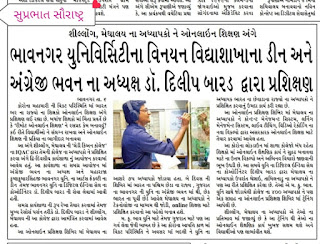 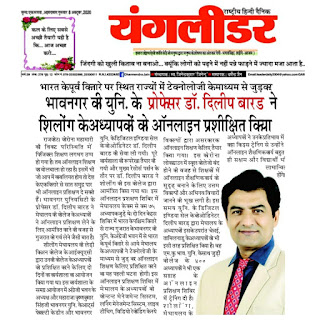 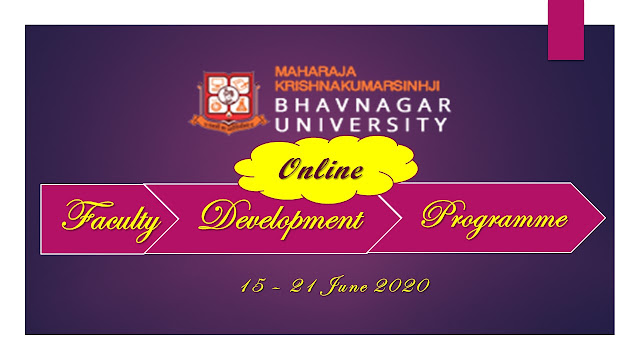 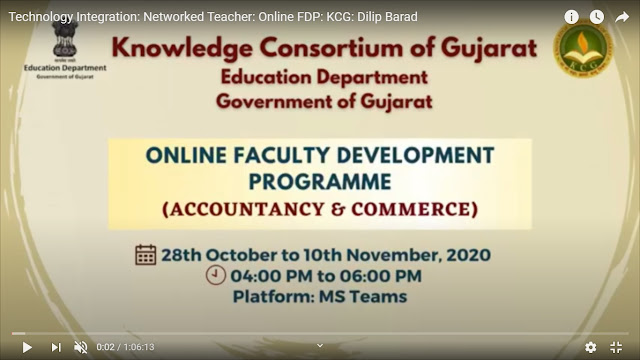 Video Recording of the Session: 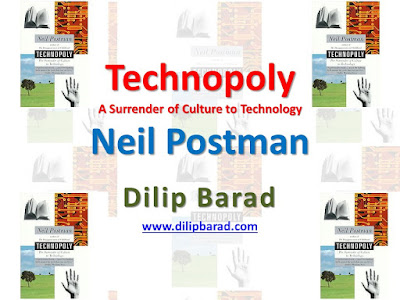 Video recording of the session with Marwadi University, Rajkot. 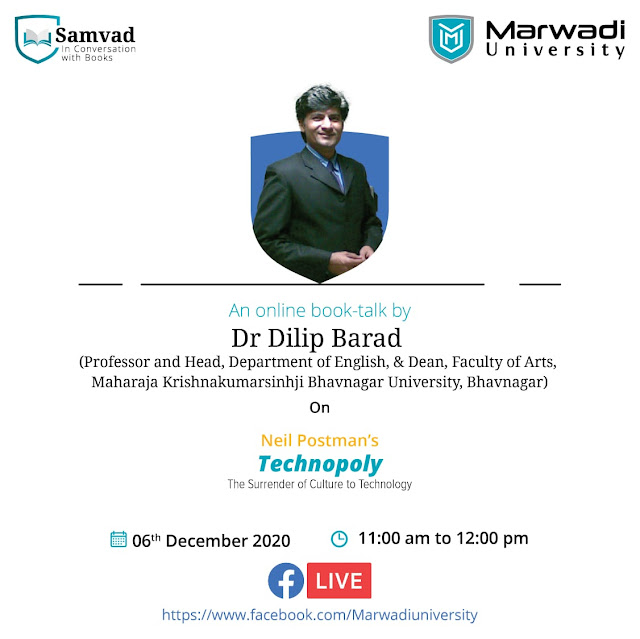 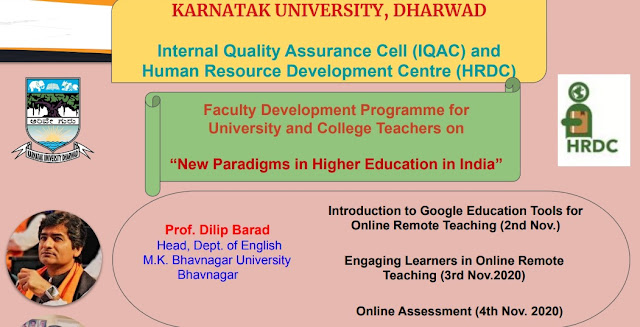 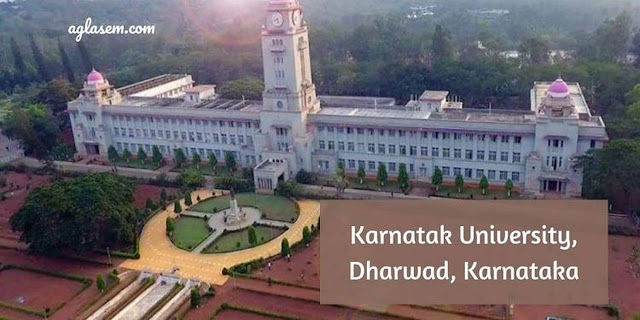 This video is the recording of 'Live' Online Session by Dilip Barad. It is the Third session of the three sessions delivered by him from 2 to 4 November 2020. It is delivered in Online Faculty Development Programme organised by HRDC and IQAC, Karnataka University, Dharwad. This session is on the online assessment using Google Quiz Form and Rubric Based Assessment in Google Classroom. 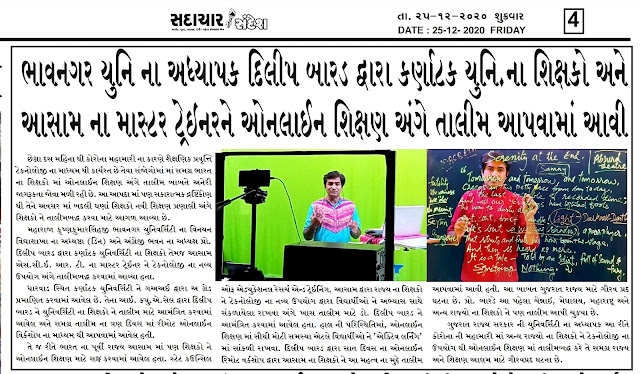 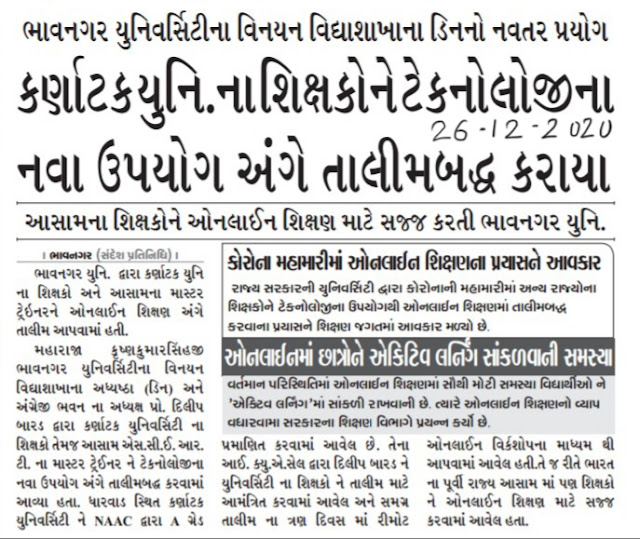 The video recordings will be made available on this blog. 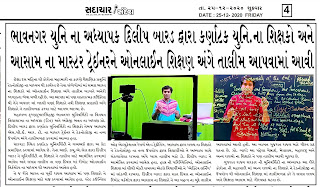 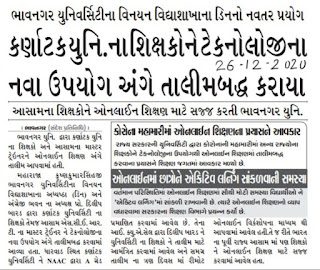 Online Test / Quiz on The Puritan and the Restoration Age 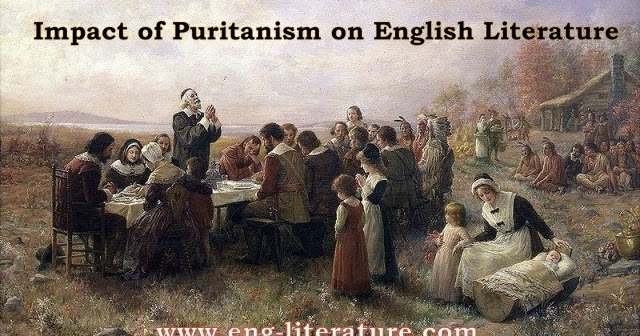 If the online test does not appear or if it is not convenient to read, click here to open test in new browser
Posted by Dilip Barad at 00:02 No comments:

What’s the Difference Between Morality and Ethics?

Generally, the terms ethics and morality are used interchangeably, although a few different communities (academic, legal, or religious, for example) will occasionally make a distinction.

Ethics, also called moral philosophy, the discipline concerned with what is morally good and bad and morally right and wrong. The term is also applied to any system or theory of moral values or principles. Click here to read this entry written by Peter Singer. Peter Albert David Singer is an moral philosopher. He is the Ira W. DeCamp Professor of Bioethics at Princeton University, and a Laureate Professor at the Centre for Applied Philosophy and Public Ethics.

Click here to take the test
After appearing in this test, read 'analysis' > scroll down to 'Political Compass Certificate' > Click to open new page > Enter Your Name to get PDF Certificate.

Let us read these statements to understand the difference between morality and ethics in proper context;

After the popularity of the genre of novel writing in form of Graphic Novel, we have an interesting possibility to have a new genre of narrating a story in form of 'Photo-Novel' for Social Media publication.

Tragedy Of Social Evils Told Through 48 Heartbreaking Images
Photography is a very powerful medium because one frame can evoke so many emotions without the help of words. Sad, happy, or worry, a good photograph can drive the message seamlessly.
‘Avani’ is a brilliant photo shoot by Arjun Kamath, constituting 48 photographs that convey the story of a woman in a patriarchal society. Avani’s story can be the story of you and me as the struggles and setbacks that she faces are the common problems of India, a country which is still deep-rooted in patriarchy. #WebSeries #TBM #TBMoriginals
If the following embedded post is not visible, click on this link to watch the narration of this Photo-Novel:

THE STORY IN PHOTOS: Traveling India by train few weeks ago, Dick Smith passed a homeless family living under a bridge, including a young girl wearing nothing but a pink bracelet. He snapped some pics on his iPhone, noted down the GPS position, and asked if Jess and I would like to go to India, try and find this same girl & her family, help them into accommodation, secure the girl an education, buy them life's basics and open her a bank account for Dick to regularly deposit into - all in three days! We just got back yesterday. SHARE this album to spread some Christmas spirit!!!Click here to watch it on Facebook, if the below embedded post is not visible.

This is not as finished as the first one but is a good attempt. The photos are good but the important aspect of narration is the 'caption'. There is absolutely nothing in the captions. If you watch the first and second story, again, you will find very precisely written captions. The real success of the narration of 'Photo-Novels' lies in the 'Captions'.
Click here, if the below embedded code is not visible. 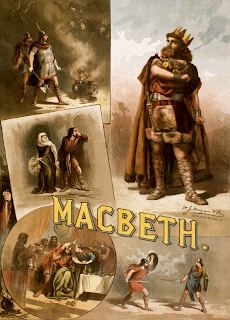 Presentation on 'William Shakespeare: About the Playwright'

William Shakespeare - About the Playwright from Dilip Barad

Presentation on 'Macbeth' - About the Play

Macbeth - About the Play from Dilip Barad

3.      What do you mean by ‘Poetic Justice’? Is there a poetic justice in ‘Macbeth’? Illustrate your answer.

5.      What is the meaning of ‘hamartia’? What is Macbeth’s hamartia? Compare it with hamartia of other tragic heroes known to you (like Hamlet, Othello, Oedipus etc).

6.      What do you understand by the concept of ‘hero-villain’? Is Macbeth a fit character for this concept? Illustrate your answer.

7.      What sort of artistic liberties are taken by William Shakespeare in ‘Macbeth’? (Key: Historical Macbeth vs Literary Macbeth: https://www.scotland.org.uk/history/time-macbeth - the sequence of the murder of King Duncan and that of Banquo are purely imaginative interpolation. The goodness given to the character of Banquo is also questioned on the grounds that the ruling King James I was a lineage of Banquo’s from Scotland).

8.      What is the content of the ‘letter’ written by Macbeth to Lady Macbeth? What is its importance in the play?

b.      Tragedy of Ambition – the Medievalism

c.       The Unchecked Ambition and its Power to Corrupt the nobleness within humans

a.       Macbeth – the Hero-Villain – the Valiant Villain – The Milk of Human Kindness wasted on the altar of ambition – tragic hero

a.       Macbeth’s soliloquy in Act I, Scene 3: This supernatural soliciting
Cannot be ill, cannot be good. If ill,
Why hath it given me earnest of success,
Commencing in a truth?

c.       Macbeth’s soliloquy in Act 2, Scene 1: Is this a dagger which I see before me,
This handle toward my hand? Come, let me clutch thee.

d.      Macbeth says these lines in Act 2, Scene 2: Whence is that knocking? –
How is’t with me, when every noise appalls me?
What hands are here! Ha, they pluck out mine eyes.
Will all great Neptune’s ocean wash this blood
Clean from my hand?

f.        Banquo in Act 1, Sc 3: “Oftentimes to win us to out harm, the instruments of darkness tell us truths, win us with honest trifles, to betray’s in deepest consequence.

13.  The Study of Cinematic Adaptations of ‘Macbeth’:

i.      What changes are made by film makers in the adaptation?

b.      Some of the well-known cinematic adaptations are:

Email ThisBlogThis!Share to TwitterShare to FacebookShare to Pinterest
Labels: about the author, about the play, about the playwright, macbeth, study questions, William Shakespeare, worksheet
Newer Posts Older Posts Home
Subscribe to: Posts (Atom)