This post will be regularly updated with possible readings of pictorial representation of mythical figures.

Here we go with Parshuram.

Parshuram Jayanti (Anniversary)
What significance do we find in the iconography of Parshuram in paintings? The first one is from an unknown painter in c. 1820. The seconds one is Raja Ravi Varma in c. 1920. The third is very popular on social media. (Can anybody share the source of this image?) The fourth is very recent digital painting.
If we read the belly - the stomach as the 'sign' in these images, what does it signify? The big belly is a very traditional 'sign' to signify the identity of Brahmin. Here, Brahmin can be read not only as an identity in Chtusvarna or caste but also as elite or high class or rich and happy leisure class people. What does the change from big belly of 1820 to slimmer in 1920s to the one with 6/8 packs of abs of recent portrayal of Parshuram signify? It surely is painted under the influence of modern day body building where in triceps, biceps, chest muscles, abs, and thigh muscles signifies an ideal macho-male figure. It is known to all that there is similarity in beauty pageants and these body building pageants. Both the ideal slim female figures as well as the ideas macho-muscular male figures are nothing but plastic and perfume. Then what does the change in the figure of Parshuram signify? Is it deeply repressed urge to be aggressive, belligerent, determined, assertive, and determined? Can it be said that those who are not so are more attracted towards such images as a part of wish fulfillment? Does it speak about owning aggression and disowning serendipity, calmness and sobriety? Does this iconography speak more about the urge of Indians to prove their mettle against the identity of 'soft nation'? At the time when so many armed personnel are killed by Naxals in Sukama and by terrorists in Kashmir, even though there is nothing new in it as it is repeated for several decades now, that deep urge to own aggression becomes even more stronger. Was it the similar urge among Brahmins to equate Kshatriyas that has captured the imagination in more recent portrayals of Parshuram and thus his looks are more aggressive?
At the same time, it is significant to observe that the deep desire to do something or be somebody is vented out in form of art and hence there is no urge left to do or be. So those who make or share such pictures of aggression, cannot be so or do so. The classic case is Bahubali2. See, how the people who were in search of answers for why jawans are killed, suddenly got engaged with why Katappa killed Bahubali? The film with similar macho-male figures will vent out the desire to 'be' or 'do' and again, with all emotions spent, we will be in the lap of serendipity, calmness and sobriety. The pictures, either still or moving, makes for an interesting reading when seen in the context of the milieu and moment which shaped it or are shaped by it.

George M. Williams ((2008). Handbook of Hindu Mythology. Oxford University Press. pp. 146–148) and T. A. Gopinatha Rao ((1993). Elements of Hindu iconography. Motilal Banarsidass. pp. 58, 190–194.) mentioned that Hanuman is normally presented as 'Bhakta' / 'Sevak' of Lord Rama and is found kneeling down on his right hand side as an ardent devotee. He is also presented with Mace (Gada) and Vajra (thunderbolt) when events from his life are presented. By and large, Hanuman is remembered in popular culture as devotee, courageous, meditative yogi. Have a look at these random inages: 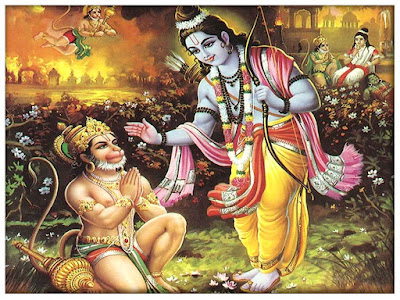 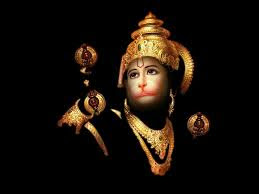 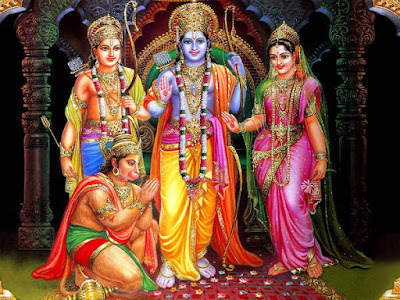 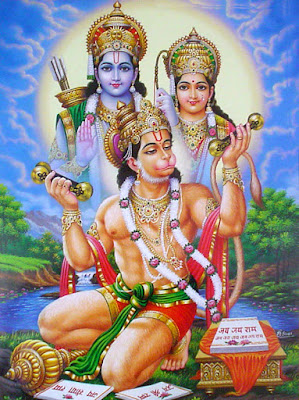 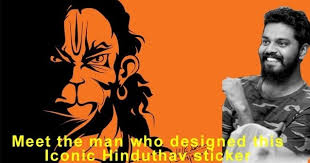 This icon of Hanuman becomes so popular with the masses that you see it everywhere. 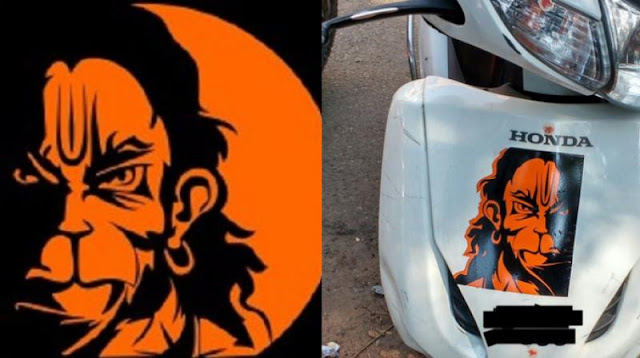 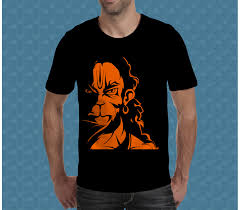 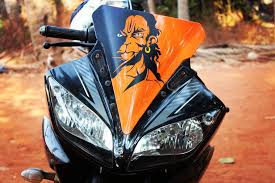 Sidhartha Bhatia wrote an interesting story for The Wire on this. Read it here.

Karan Acharya's rendition of Hanuman 'image' gives completely different spin.
The image in question, done in dark saffron and black, shows Hanuman with a furrowed brow, glowering eyes and a scowl. The monkey god has very different qualities in Hindu lore but the work projects ultra machismo that fits in well with the self-image of the Hindutva oriented male. Acharya says his Hanuman has “attitude not aggression”, is “powerful, not oppressive”. Those who are displaying it with pride may not necessarily think so.

It is the kind of image that can be used and amplified across multiple platforms and could transmit just the message that . . .  'The Hindu is effete no more; he is angry and ready to take on anyone, violently if necessary'.

The young demography of India may no longer like Raja Ravi Varma's Hanuman. The angry Hanuman ticks off all the key boxes from the right-wing point of view – not only is it hyper masculine and forceful in its representation, it is also modern. This is clearly graphic art, possibly done on the computer, in a stylistic way that would appeal to a younger demographic. They may not be attracted to the soft-focussed, kitschy, calendar representations of yore that can be seen in homes and shops all over India. No self-respecting young Hindutva warrior will want to stick a work of Raja Ravi Verma on his SUV; this looks technologically advanced enough to use with pride and arrogance.
Isn't this iconographic reading of the mythical figures enigmatically captivating and fascinatingly stimulating?

Iconography of Mohammad, the Messenger