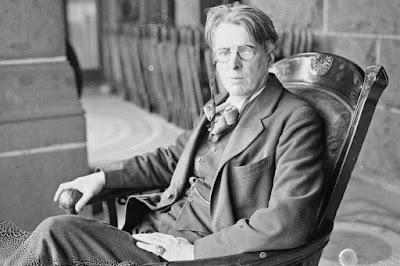 Turning and turning in the widening gyre
The falcon cannot hear the falconer;
Things fall apart; the centre cannot hold;
Mere anarchy is loosed upon the world,
The blood-dimmed tide is loosed, and everywhere
The ceremony of innocence is drowned;
The best lack all conviction, while the worst
Are full of passionate intensity.

Surely some revelation is at hand;
Surely the Second Coming is at hand.
The Second Coming! Hardly are those words out
When a vast image out of Spiritus Mundi
Troubles my sight: somewhere in sands of the desert
A shape with lion body and the head of a man,
A gaze blank and pitiless as the sun,
Is moving its slow thighs, while all about it
Reel shadows of the indignant desert birds.
The darkness drops again; but now I know
That twenty centuries of stony sleep
Were vexed to nightmare by a rocking cradle,
And what rough beast, its hour come round at last,
Slouches towards Bethlehem to be born?

Analysis of the poem - 'The Second Coming'

2. On Being Asked for a War Poem

I think it better that in times like these

A poet's mouth be silent, for in truth

We have no gift to set a statesman right;

He has had enough of meddling who can please

A young girl in the indolence of her youth,

Or an old man upon a winter’s night.

Analysis of the poem 'On Being Asked for a War Poem'

Students Response | On Being Asked for a War Poem