Lagaan: Lagaan (transl. Agricultural tax), released internationally as Lagaan: Once Upon a Time in India, is a 2001 Indian Hindi-language epic musical sports film written and directed by Ashutosh Gowariker, and produced by and starring Aamir Khan, along with debutant Gracy Singh and British actors Rachel Shelley and Paul Blackthorne in supporting roles. The film is set in 1893, during the late Victorian period of India's colonial British Raj. The story revolves around a small village in Central India, whose inhabitants, burdened by high taxes, and several years of drought, find themselves in an extraordinary situation as an arrogant British army officer challenges them to a game of cricket, as a wager to avoid paying the taxes they owe. The narrative spins around this situation as the villagers face the arduous task of learning a game that is alien to them and playing for a result that will change their village's destiny. 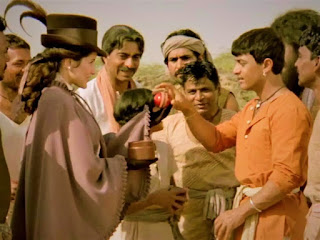 Using 'Lagaan' as a case in point, this paper argues that popular Bollywood films with their appeal to the mass audience of uprooted peasants, factory workers, the unemployed, uneducated and poor can decolonise the imagination of the Indian masses. It points out that "Lagaan's" efforts at indigenisation and interrogation of prescribed discourses of modernity and history deserve credit for making possible the creation of public debates within a culture where the majority of the population is non-literate, and is unable to partake in elite discussions of culture and modernity.
Chandrima Chakraborty. “Subaltern Studies, Bollywood and ‘Lagaan.’” Economic and Political Weekly, vol. 38, no. 19, 2003, pp. 1879–1884. JSTOR, www.jstor.org/stable/4413550. Accessed 2 July 2021.
2. Reading cricket fiction in the times of Hindu nationalism and farmer suicides
This paper will critique postcolonial theory's attempt to read the cricket nationalism portrayed in the Oscar-nominated Bollywood film Lagaan as one that subverts the civilizing mission of British colonialism and also restores the agency of the subaltern classes. Instead, it will argue that this cricket nationalism replicates Indian bourgeois nationalism, which has no place for the subaltern in its imaginary. It will also argue that the postcolonial thesis of decolonization and indigenization of cricket supposedly achieved by Lagaan is marked by a culturalism that does not take into account structural factors such as capital, class and caste that dominate the institution of cricket in India. Finally, against postcolonial theory's tendency to read a text in isolation from the context, it will be contended that the cricket nationalism of the film can only be understood by locating it in relation to the present socio-historic conjuncture wherein forces of capital and nationalism are hegemonic.
Nissim Mannathukkaren (2007) Reading cricket fiction in the times of Hindu nationalism and farmer suicides: Fallacies of textual interpretation, The International Journal of the History of Sport, 24:9, 1200-1225, DOI: 10.1080/09523360701448349
3. Post Colonialism And Political Resistance In Lagaan: Once Upon A Time In India
Using the movie Lagaan as a case in point, the paper examines the post-colonial and political resistance in the 19th century. Lagaan is a Bollywood movie released in 2001 and is directed by Ashutosh Gowariker. The fictional story is set in a village in India and it explores the struggles faced by the citizens to earn their rights. Taking in account of the movie, the paper analyses the socio-political scenario of the country.
4.  INDIAN CINEMA: Then and Now - PARTHA CHATTERJEE
https://www.jstor.org/stable/41804040
5. Subaltern Studies, Bollywood and "Lagaan" - Chandrima Chakraborty
https://www.jstor.org/stable/4413550
6. Real and Imagined Audiences: "Lagaan" and the Hindi Film after the 1990s - Rachel Dwyer
https://www.jstor.org/stable/25758031
7. What's so Great about Lagaan? - Sudhanva Deshpande
https://www.jstor.org/stable/23005829
https://www.jstor.org/stable/4413550
8. Leadership Lessons from Lagaan
https://www.slideshare.net/mohitsingla/lessons-from-lagaan-16096178
Watch film 'Lagaan' 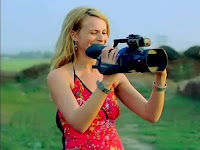 Rang De Basanti (transl. Paint it saffron) is a 2006 Indian Hindi-language drama film written, produced and directed by Rakeysh Omprakash Mehra, and co-written by Rensil D'Silva.
The film follows a British film student traveling to India to document the story of five freedom fighters of the Indian revolutionary movement. She befriends and casts five young men in the film, which inspires them to fight against the corruption of their own government. It features an ensemble cast consisting of Aamir Khan, Siddharth, Atul Kulkarni, Soha Ali Khan, Sharman Joshi, Kunal Kapoor and British actress Alice Patten.

A major point of criticism the film faced was regarding the possibility of the Indian Army attacking students in a radio station. When Rakeysh was questioned about the same in a scriptwriter's conference conducted by the Film Writers Association in the year 2008, he said the following, "So, in 2005, in Allahabad, a bunch of 4 students took the TV station there, and they were shot dead. Everything I did, it was kind of borrowed, as I said right here. Obviously, what I am also learning is the way I tell a story is not real; you can term it as a-real. For maximum impact, for the message to go through, I felt—since the story was against the establishment—let the establishment do it. After all, the establishment did hang Bhagat Singh. After all, the establishment did come down on the innocent, innocent students in Mandal Commission. After all the establishment did come down on Tiananmen Square. After all the establishment did come down when the whole concept of Flower Power emerged in America. So it's all there. It's borrowed, maybe not as realistically, but it is definitely there in the society. During emergency, there are horror stories. If we have to go back to Kriplani and his movement in Bihar, the stories are absolutely horrific."
Reading resources on Rang De Basanti
1. Rang De Basanti - Consumption, Citizenship and the Public Sphere
The central objective of this thesis is to explore whether the consumption of RDB stimulated citizenship among young audiences and caused an expansion of the public sphere in India.
2. Bollywood as National(ist) Cinema - Violence, Patriotism and the National - Popular in Rang De Basanti
This essay sets out to explore the relationship between violence, patriotism and the national-popular within the medium of film by examining the Indian film-maker Rakeysh Mehra’s recent Bollywood hit, Rang de Basanti (Paint It Saffron, 2006). The film can be seen to form part of a body of work that constructs and represents violence as integral to the emergence of a national identity, or rather, its recuperation. Rang de Basanti is significant in contemporary Indian film production for the enormous resonance it had among South Asian middle-class youth, both in India and in the diaspora. It rewrites, or rather restages, Indian nationalist history not in the customary pacifist Gandhian vein, but in the mode of martyrdom and armed struggle. It represents a more ‘masculine’ version of the nationalist narrative for its contemporary audiences, by retelling the story of the Punjabi revolutionary Bhagat Singh as an Indian hero and as an example for today’s generation. This essay argues that its recuperation of a violent anti-colonial history is, in fact, integral to the middle-class ethos of the film, presenting the viewers with a bourgeois nationalism of immediate and timely appeal, coupled with an accessible (and politically acceptable) social activism. As the sociologist Ranjini Majumdar noted, ‘the film successfully fuels the middle-class fantasy of corruption being the only problem of the country’.
Watch film 'Rang de Basanti'

Postcolonial theory in films - Oxford Bibliographies
Postcolonial theory has hardly been a defining paradigm in the field of film studies. Postcolonial theory originally emerged from comparative literature departments and film from film and media studies departments, and despite the many intersections postcolonial theory has not been explicitly foregrounded. However, there are more similarities and natural points of intersections between the two areas than it would at first appear. For example, both postcolonial theory and film studies emerged at the end of the 1970s with the development of semiotic theory and poststructuralist thought. Both areas engage intensively with the field of representation, implying the ways in which a language, be it cinematic or otherwise, manages to convey reality as “mediated” and “discursive,” and therefore influenced by power relations.
The Anti-Colonial Revolutionary in Contemporary Bollywood Cinema - Vidhu Aggarwal
In her article "The Anti-Colonial Revolutionary in Contemporary Bollywood Cinema" Vidhu Aggarwal discusses several contemporary films including Rakesh Omprakash Mehra's Rang de Basanti with focus on the figure of the revolutionary hero. The Bollywood film is a cultural form that combines several aesthetic styles, from within India and from the outside. With its formal heterogeneity and as a product of one of India's largest cities, Mumbai Bollywood has had an ongoing fascination with "arrival," that is, with India's status as a contemporary nation-state. While some Bollywood films seem to celebrate fantasy scenarios of India's arrival on the global scene, at the same time they express anxiety about affective possibilities within a new Bollywood of higher production values and larger global reach, an India of mobile borders and attenuated historical context. Aggarwal examines the way the contemporaneity of Bollywood — both in terms of acting style and aesthetics — is negotiated through reenactments of the colonial period and compares Bollywood cinema with aspects of the British film Slumdog Millionaire, directed by Danny Boyle.
Posted by Dilip Barad at 20:03