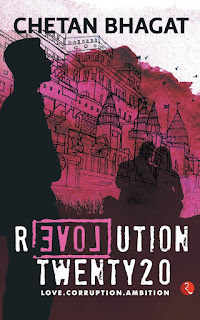 “Once upon a time, in small-town India, there lived two intelligent boys.

One wanted to use his intelligence to make money.

One wanted to use his intelligence to start a revolution.

The problem was, they both loved the same girl.”

“Revolution 2020 – a story about childhood friends Gopal, Raghav and Aarti who struggle to find success, love and happiness in Varanasi. However, it is not easy to attain these in an unfair society that rewards the corrupt. As Gopal gives in to the system, and Raghav fights it, who will win?” (Blurb on the last cover-page)

Revolution 2020: Love, Corruption, Ambition is a 2011 novel by Chetan Bhagat. Its story is concerned with a love triangle, corruption and a journey of self-discovery. R2020 has addressed the issue of how private coaching institutions exploit aspiring engineering students and how parents put their lifetime's earnings on stake for these classes so that their children can crack engineering exams and change the fortune of the family. While a handful accomplish their dreams, others sink into disaster.

Characters in the Novel:

1. Gopal Mishra - One who wanted to use his intelligence to make money - who ultimately joins hands with corrupt politician to walk on the path of corruption and starts private engineering college, Ganga Tech College in Varanasi.
2. Raghav - One who wanted to use his intelligence to start a revolution - who ultimately runs his own news paper 'Revolution 2020' to bring in change in society and make nation free from corruption. He has cracked JEE and AIEEE and joins BHU-IT instead of famous IITs or NITs so he can pursue journalism along with engineering. He follows his passion to be a journalist who can bring in 'change' in society rather than opt for an easy job in multination company or public sector company like his father who was IITian and works as engineer in BHEL.
3. Aarti - daughter of IAS office who is District Magistrate of Varanasi and love interest of both, Gopal and Raghav.
Visit this page for long list of all other characters in the novel . . . (Click here)

The novel 'R2020' deals with the theme of Love, Corruption, Ambition and Revolution.

Click here to read in detail about these themes.

Chetan Bhagat narrative technique has a sort of method which he follows in most of his novels. His signature style is to stat with Prologue and end with Epilogue. He himself appears in these prologues-epilogues and listens story from one of the characters of the novel - and then allows him to tell the story in fist-person narration.
Can we apply

's narratology to this novel?
(Click here to read more on narrative technique)

Undoubtedly, Revolution Twenty20 belongs to the genre of 'Genre Fiction'. It is part of popular literature. It represents popular contemporary culture of India.
Read more about the characteristics of Popular Literature.

Check your understanding of the novel