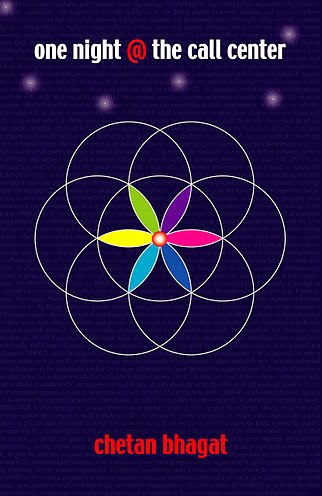 (Do not miss to visit this blog for some interesting videos and links
http://dilipbarad.blogspot.in/2014/01/chetan-bhagat-writer-prof-om-juneja.html)
“It isn’t great literature. Serious critics will no doubt quibble with the two-dimensional characterization, the pedestrian prose, the plot’s contrived dues ex machine, and the author’s hokey spiritualism.” . Yet, Chetan Bhagat’s novels remain top 5 best sellers in January 2014. ‘one night @ the call centre’ (on@tcc, the author likes to call it thus), after nine long years of its publication, still retains sixth position among top ten bestselling novels in India in January 2014.. Even then, there are websites which does not consider Chetan Bhagat in revered and highly acclaimed English fiction and novel writers who have garnered prestigious literary awards such as the Pulitzer and the Booker Prize. . This website considered Arundhati Roy (The God of Small Things - 1997), Amitav Ghosh (The Shadow Lines – 1988), Anita Desai (Fasting, Feasting - 1999), Vikram Sheth (A Suitable Boy – 1993), Khushwant Singh (Train to Pakistan – 1956), Abraham Verghese (Cutting For Stone – 2009), Amit Chaudhary (The Immortals – 2009), Akhil Sharma (An Obedient Father – 2000) and Aravind Adiga (The White Tiger – 2008) as the Top Selling Must Read Indian Novelist of high acclaim. Quite conspicuously, Chetan Bhagat is not mention in this list. It may not have any effect on Chetan Bhagat. “For all its billion-strong population, only 61% of whom can officially read, India is hardly commercially viable territory for the workaday novelist. The typical Indian “bestseller” sells between 3,000 and 5,000 copies; a true success is one that remains in print for years, with reprints of 2,000 copies or so every nine or twelve months. In this modest market, on@tcc reportedly sold more than 1,00,000 copies in the first few months after its publication, and the demand shows no sign of abating.” . Quite obvious, why would anybody care for awards when the showers of manna overflow the coffers?

To be or not to be popular is not under the control of the text. So, to say that, the text does not have literariness because it is popular is nothing less than an injustice forced on the text.  No fiction shall be denied the literary analysis. We may conclude against the text, but not without weighing pros and cons of and in the literary text.

Well, let us see if this brave attempt by the Boswell of this brave new middle-class Indians (the Samuel Johnsons) has captured their aspirations, the dream and the desire better themselves in the era of Globalization with poignancy or has just touch-and-go kind of superficial portrayal of their characters and life. Let us pose some questions before on@tcc and see if it has potential to answer them.  The students are suggested to give their responses to the below given markers in the ‘comment’ below this blogpost.

1.     Contemporary issues in on@tcc:
a.     Do you agree: “Bhagat has a talent for tapping into the zeitgeist; that he is not much older than the people he writes about makes him a particularly credible portrayer of their world.” . Give illustrations from your reading of the novel.
b.     Can you justify this observation? “Bhagat's tone is pitch-perfect, his observer's eye keenly focused on nuance and detail. Verisimilitude is all: The first two thirds of the novel evokes, indeed reproduces, the way the young call center workers think, talk, eat, drink, dress, date and behave.” .
c.      Had  Bhagat’s vision been shallow, he wouldn’t have been able to see “call-centers as soul-destroying sweatshop, soaking up the energies of young Indians who could be doing better for themselves and their country”. . Do you feel that Chetan Bhagat with this observation has captured the skeleton image of the undercurrents in the society?
d.     Bhagat has an insight for the contemporary issues that are movers and shakers in India. See the below give table. You will find all his novels listed with the key contemporary issue portrayed with his imaginative stockade in the fiction, respectively. Share your observations on the important issues of the time and its delineation in Chetan Bhagat’s fictional oeuvre.

e. Coleridge remarked in defence of Wordsworth: “Had Mr. Wordsworth's poems been the silly, the childish things … they must have sunk at once, a dead weight, into the slough of oblivion, and have dragged the preface along with them.” . In light of the decade long career of Chetan Bhagat, can we say so about his literary contribution?

a.     Menippean satire, seriocomic genre, chiefly in ancient Greek literature and Latin literature, in which contemporary institutions, conventions, and ideas were criticized in a mocking satiric style that mingled prose and verse. . Can you justify on@tcc as Menippean satire?
Do not miss to illustrate contemporary conventions like ‘throwaway culture’ or ‘the great Indian chamcha’ (watch this video:

i.      Other issues that surfaced while discussion in the classroom – Bossism (authority), satire on people’s mindset that God only can solve problem, satire on work-culture (i.e. love your work but never your company, you never know when your company stops loving you), ‘loyalty’, marriage institution, family values (Priyanka: “I want my mother to be happy. But I cannot kill myself for it. My mother needs to realize . . . she is responsible for her own happiness.” Radhika: “I want to divorce Anuj. I don’t want to ever look at my mother-in-law’s face again.” ).

a.     Thomas Friedman’s the World is Flat and on@tcc:
i.      Friedman’s notion of the Flat World is a reality. Justify this with an analysis fo the novel on@tcc. (Read here the reference in Chapter 2)
ii.      What sort of future projections discussed in The World is Flat seems to be supported in the fictional narrative of on@tcc?
iii.      on@tcc is a novel which brings out th effects of Globalisation at the cost of the personal. Elaborate.
iv.      Globalization has had a huge impact on thinking across the humanities, redefining the understanding of fields such as communication, culture, politics, and literature. . How far is this novel affected by Globalization?
v. "Although technological revolution, transnational corporations, and global restructuring of capitalism have made the world increasingly interdependent and interconnected, radically altering our concepts of time, space, politics, and relations, this has in no way changed the fundamental fact that the West still poses or imposes itself as the centre of the world. The mythology of a world already decentered politically, culturally, economically, and ideologically papers over the lived global power-relations between the developed West and the underdeveloped Rest." (Shaoba Xie, Is the World Decentered? A Postcolonial Perspective on Globalization.) 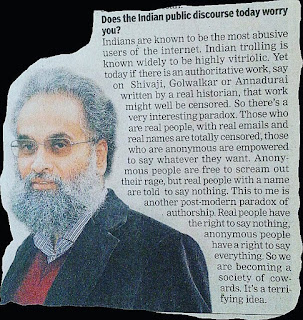 4.     Narrative Structure:
a.     The literature is not just telling stories in chronological order. It is the ‘how’ part of the story-telling which matters most. Chetan Bhagat makes interesting use of prologue and epilogue in this novel. The Aristotelian unities of time, place and action are also taken care of in plot construction. The justification of dues ex machine is also given with the possible alternative reading of the novel without God. Discuss with reference to the narrative structure of Life of Pi , the merits and demerits of the narrative structure of on@tcc.


b. “The narrative follows the dream of the author in train from Kanpur to Delhi, wherein God, in form of mysteriously beautiful young lady, narrates the story of ‘One Night @ the Call Centre’, which, in turn, is written from the perspective of Shyam – one of the six characters in the novel.” Comment upon the narrative structure of the novel.

a.     Do you agree that on@tcc has following characteristics "Popular Prose Fiction."  of Popular literature? Do not miss to give illustrations:
i.      Popular literature commonly lacks a sustained plot, worked out with close regard to cause and effect.
ii.      Still more characteristically it lacks the study of character and the intellectual analysis of such varied problems as occupy the fiction of the present age.
iii.      The popular romances lay their stress chiefly on incident and adventure or simple intrigue, and set forth only the more familiar and accepted moral teachings.
iv.      They represent, on the whole, an instinctive or traditional, rather than a highly reflective, philosophy of life.
v.      For all these reasons they have come to be regarded chiefly as the literature of children; a natural result, perhaps, of the fact that they originated largely in the childhood of civilization or among the simple peoples in more advanced ages.
vi.      It does not raise or answer abstract questions; it assumes that man knows what he needs to know in order to live.

a.     Define and discuss the characteristics of Self – help book in on@tcc.
What is the importance of the Call from God in the novel? Do you believe that under the law of probability and possibility, there are once in a while chances of such happenstance?
b. Reading resources:
i) Self-Help, Inc. by Micki McGee / Review of this book - Click here to read online
ii) Self-Help Book (wikipedia)

7. One of the themes of the novel is its anti-American sentiments which are intertwined with Nationalism. Had you been God, what would have been your answer to Vroom when he said "If only you had given India as much as America!"?

8. What is Cyber Punk? Can on@tcc be categorised as cyber punk novel?

The Hindi film Hello is based on this novel. (Bhagat, Hello)

Bibliography
Posted by Dilip Barad at 01:04