Universal Human Laws in the modern epic 'The Waste Land' by T.S. Eliot. 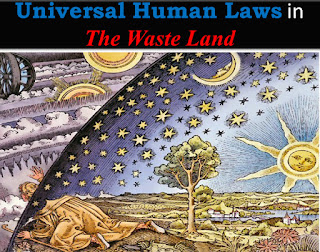 The connection between epic and myth is that of an egg and the chicken. Just as the famous riddle by Sphinx ("What is the creature that walks on four legs in the morning, two legs at noon and three in the evening?"), whether the egg came first or the chicken is the riddle which puzzled many for centuries. Is myth the product of an epic or does epic sprout from the myth? The sphinx riddle was answered by Oedipus ("Human Being") and the 'egg-chicken' one by scientists ("Researchers found that the formation of egg shells relies on a protein found only in a chicken's ovaries. Therefore, an egg can exist only if it has been inside a chicken"). Similarly, we can say that myth pre-exist the epic. In fact, epic poet legitimizes myth as history or truth. The epic is the daughter of the mother, Myth/s. Thus, an epic can be studied as myth. The tools and theories to study myth can easily be applied to epic.
Are myths / epic subtle codes that contain some universal truth? Are they a window on the deep recesses of a particular culture? Or are they just entertaining stories that people like to tell over and over? Functionalism explains human society as a whole in terms of the function of its constituent elements; namely norms, customs, traditions, and institutions. A functionalist reading of myths/epic might extract the universal human laws.
Have a look at this presentation with various Universal Human Laws in 'The Waste Land'.

Task:
After studying these Universal Human Laws, would you like to give priority to the UHLs which you find more Universal than the other? Click this link to open an online form and give your priority: