Sardar - The Iron Man of India 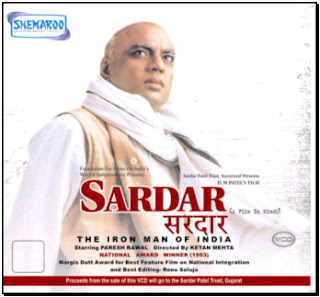 Ketan Mehta's ‪#‎Sardar‬ is not only bio-pic but a well researched docu-drama. It precisely records the in-house meetings and brainstorming discussions between leaders on how and in which form India can become ‪#‎independent‬ country. Ultimately, as no midway was sought and ‪#‎Gandhi‬'s idea of giving reigns of Indian union to Mohmad Ali Jinnah - Muslim League was not acceptable to other Congress leaders. The script is well researched and supported by evidences of real video footage and news paper headlines. The research n script by ‪#‎VijayTendulkar‬ makes this movie worth watching, again and again. The magical touch of his script and Ketan Mehta's direction has saved this film from being dull documentary. It has some memorable dramatic sequences which keeps interested in the film alive till end and even though very talkative, the film gives wonderful cinematic experience.
Best of all sequences: All the meetings on division of resources (money, army, air force, secret agency etc) between India and Pakistan - is beautifully portrayed; inclusion of Kashmir, Hyderabad and Junagadh is captured very well; the central struggle between Sardar and Jinnah gives best cinematic moments.
The communal riots and massacre in the backdrop gives elegiac colour tone to the texture of this film, which is brightened with fresh cinematography and shooting at real life locations like Shimla, Junagadh, Delhi.

Yes. The film presented Sardar Patel larger than life. Ketan Mehta directed most of the freedom fighters as "types" - representing a particular "image" for which they are popularly known rather than humans with strength n weaknesses. Jinnah, Nehru, Maulana, Abdul gafar khan, mountbaton, gandhi - all are portrayed with similar touch. And as this was Sardar's film, he is a bit exaggerated.
Rather than the characters, the historical background is presented very well.