In Derridean discourse, it is believed that *Language bears within itself the necessity of its own critique*. The element to undermine the proposition or hypothesis lies within itself.

Well, can we find anything in this image to deconstruct it?

If language bears within itself the necessity of its own critique, how can we find the aporia / loose stone in this meme to deconstruct its very existence. On what grounds can we undermine the signifier so us to make Sign have different signified?

One of the ways of doing so is to deconstruct the metaphor. The literal reading of metaphor can help in presenting a critique of its sign. In this meme, the animals are used metaphorically. The animals suggest humans with varied capabilities. One animar is good in the skill which it is meant to perform and is utterly incapable of performing other skills. Similarly, it attempts to suggest that humans cannot do everything. All humans are born with a gift to do one or the other things.
That's fine. But this 'maxim' that humans cannot do everything is not aptly used in this meme. Rather, it is fact that humans can do whatever they want to. Though humans are animals, yet humans are intelligent animal. Only human beings have intelligence as well as imagination. This makes human beings capable to have philosophy as well as historical sense. These capacities makes humans far better than other animals. Especially, when it comes to education, there is no parallel between humans and animals. Yes, training is a different things. We can train animals into doing several things and can use them in Circus or domesticate to use them for agrarian works. But we cannot educate animals . We cannot teach language to animals. We cannot teach language to philosophise or have historical sense. Thus, this meme do not convey the right message. It may be good for the satire on 'standardization of tests' but not at all on 'education system'.

Do you have any other points to deconstruct this metaphor? 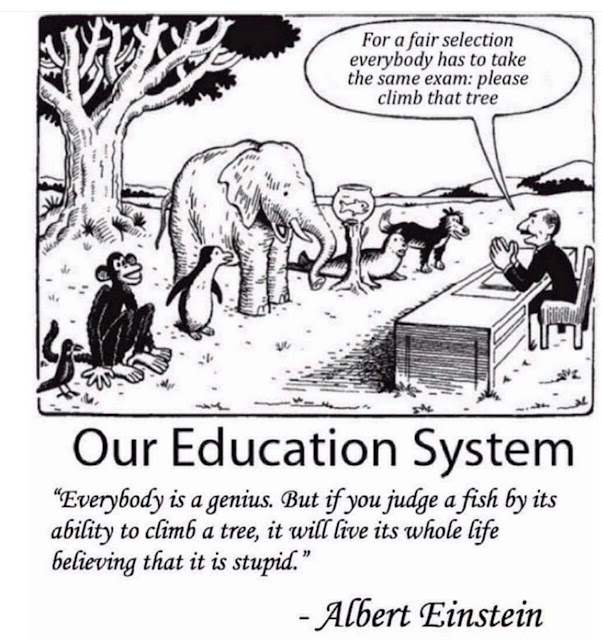