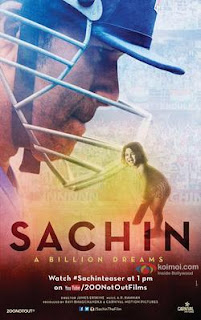 Sachin A Billion Dreams 2017 is not a movie. Neither it is not a docu-drama. It is pure documentary. A traditional documentary. A dull, flat and insipid documentary. How weary, stale, flat, and unprofitable Seem to me this life story of Sachin Tendulkar.
Director James Erskine has made several docu-dramas on sport personalities and events. The battle of Sexes on Tennis, Shooting for Socrates on Football, Pantani: The Accidental Death of a Cyclist on Cycling. He is experienced in dealing with sports personalities and making documentaries on them. However, this is not so impressive attempt.
In his interviews he said he wanted to capture 'the boy who became God'; 'the human behind the God' and the culture of time.
Well, that sounds interesting!
This 'God' idea is though provoking. Who was the first to call him so and thereafter who went on celebrating him as God - and Cricket as Religion - the sports which unites all Indians who are like broken pieces of mirror? Was it merely Mark Mascarenhas's celebrity management gimmick which nested in collective consciousness of all cricket lovers? Had these questions been unearthed and interpreted, the documentary would have redeemed itself.

The economic culture of India - the LPG moment of 1991 - and rise of Sachin and along with it the billions of dreams of middle class Indians to be rich and successful. The documentary began well with this concept. Nevertheless, this stimulating concept neither had its 'middle' nor an 'end'. This fascinating metaphor is lost in the hagiography of Sachin Tendulkar.

The family culture of India wherein a good wife sacrifices her joys and career for the success of husband, makes his problems hers - is very well captured. It is director's success to make Anjali speak this in documentary. The middle class Indians grow their girls with such nonsensical stuff to condition their minds wherein they are constantly ready to sacrifice for husbands. Things are changing in India. Those were nineties. The cultural dynamics, so far as, man-woman relations are concerned, are undergoing tremendous upheavals. The director should be appreciated for this success.

The documentary gives a few more seconds to the frame when Sachin is out in 2011 World Cup Finals and Virat Kohli is entering to bat. Virat is today’s Sachin. Culturally speaking, Virat is not Sachin. That God-element is missing. One shall be culturally right, to be considered God in this country. Virat Kohli, with his 'insulting' temperament, love-affair, tatoo - cannot be God for Indians.

Something pinches. The way documentary mentions Mohammad Azharuddin as the conflicting ‘power center’ which did not allow Sachin to settle as captain when he was very young to carry the responsibility - and - the villainous portrayal of Greg Chappell; there is no mention of the much wanted aggression to Indian cricket team which was given by Saurav Ganguly and the charismatic victories in all forms of cricket under captain-ship of M S Dhoni. After all, the dream which has its beginning in 1983 World Cup win, ends in 2011 under leadership of M S Dhoni.

Indian cricket passed through one of the worst phase of match-fixing allegation and IPL corruptions. The documentary is completely mum on these controversial issues.

People like me share almost common birth year with Sachin. We have lived with Sachin and his batting. He has given great many cherishing moments. Even when i write this, it gives goosebumps. Whenever he batted well, and he did it innumerable times, we felt confident in what so ever we were doing. We thought, today Sachin has played well, things can’t go wrong.
However, it is disappointing to write that this documentary fails - absolutely fails - to recreate those moments.

Sachin, though was model of so many products, never had appealing screen presence except when he was on ground with bat in his hands - doing nothing but batting. He narrating his story is one of the weakest point of this documentary.
It seems the documentary is not scripted and edited with great precision. Somebody has hurriedly chalked out some dots and director wanted to connect with lines of economics, iconic personality and culture of India. Somehow, the dots are not connected so well.

Our wait, to watch a film on Sachin like M.S. Dhoni or Bhaag Milkha Bhaag, continues.
Among a few cherishing moments the documentary captured is the beginning of the documentary - motivating message:
"My father always told me you have chosen cricket to play, that is just one chapter in your life. But something that will stay permanently with you, is the person you are."
‘मेरे पापा हमेशा कहते थे तुमने क्रिकेट को चुना है लेकिन आखिर में तुम्हारे साथ जो बात रहेगी वो ये है कि तुम इंसान कैसे हो, और मुझे इससे ज्यादा खुशी मिलेगी अगर तुम एक बेहतर इंसान बन सको.’
And this is very powerful statement. Sachin Tendulkar, so far, has lived his life true to his father's wish.
The Sachin phenomenon is much larger than life to be justified in documentaries or movies.