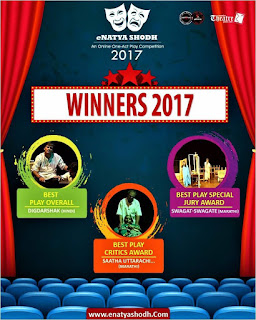 
The Film Screening Committee of Department of English, M K Bhavnagar University organised screening of this play. Thanks to all the committee members, specially to Alpa Ponda, for the show.

Though the central conflict in the play is about theatre vs cinema, it is richly layered to offer several universal themes.
The protagonist of the play, the Director, is in favour of theatre. He dislikes talented actors joining film industry / cinema.
We have several age old controversies in the field of art and literature.
Art for the sake of Art Vs Art for the sake of Life.
Is the prime function of literature to offer aesthetic delight or instruct / teach?
Is History or Philosophy better than Literature in the matter Truth / Fact?
We have no ultimate answers to these debates.

Theatre Vs Cinema : Stage Vs Screen

Coming of the age of cinema, we dabble with yet another equally interesting debate - Theatre Vs Cinema.
The Gardian's film critic Peter Bradshaw has written an interesting article on Stage Vs Screen. This is worth reading. The experiment he wrote about is amazing. He watched Kenneth Branagh's Romeo and Juliet till interval live performance in the theatre and the other half, on cinema screen wherein the play was live streamed. He realised that both the form of art have its own charm.
It is believed, and quite truly, that theatre is more difficult than cinema. Both for director as well as actors, not to mention the hard work people behind the screens do during Fade-in and Fade-out, have to painstakingly work during rehearsals. The effort put in live performance is far more rigorous and demanding than in cinema shooting wherein 'retakes' can help actors improve their performance and take enough rest in between.
It won't be exaggeration if we say that for a theatre actor, perfromance in cinema is child's play, whereas for cinema actor, it is a hard nut to crack (लोहे के चने चबाना) to perform before live audience.

There is yet another interesting difference between the Theatre and the Cinema. The Cinema is more democratic, whereas, theatre is authoritative, almost dictatorial. The Director is the dictator. Not only as per auteur theory, wherein director is the author, but actually, director is authoritarian, even in the sense of someone demanding obedience (here, not political). The cinema is collective work. The camera-man, the editor, the sound composure and other crew members can help director and also actor in highlighting the better part and hiding the weakness of the acting / performance. There is no need of strict obedience or military sort of discipline in shooting films. Anything can be re-shoot. The finished product can be changed.
The theatre does not allow this freedom. Even a slight weakness in voice modulation or body gesture is, strictly, not permitted. One has to overcome all sorts of weaknesses before final show. No changes are possible in final performance which happens before live audience. The discipline and obedience to Director, almost the sort of followed by soldiers is demanded in theatre.

This is yet another interesting theme in the play. Now-a-days, there is lots of talk about balance between work life and family life / personal life. The protagonist, the Director, has sacrificed the joys of family life on the alter of theatre. His son almost hated him for not paying enough attention to his career or higher studies. The son's reaction turns out to be nemesis in the play. It is the son to urges one of the best actors of the theatre group to leave his father, expecting that this may turn father towards family. The father was more of Director. He never returned home from theatre.
In is universally acknowledged that the man in pursuit of success or passionate about Art or in quest of Spirituality or having higher goals for the better of society and humanity, must be in want of family grace and happiness. Both is not possible. The balance between these two lives only turns human beings to be satisfied with mediocrity. One can be 'Average' in both - the family as well as in work. Cannot excel in any. Why do this average or mediocre life is projected as something good and valuable. The play ends with the regret for the protagonist and he craves to go back to home. This is rather regressive. This turns great man potential humans into mediocre or average. One should always remember that Buddha, Gandhi, Swami Vivekananda and the likes never went back to their homes. They lived . . . . and died for larger goals in life.
It seems that this idea of balance is the product of capitalist culture wherein the concept of 'work-more-and-sincerely-during-working-hours-so-that-you-can-go-home-and-enjoy-life-with-family is insepted. So that they may not work late hours and ask more wages for extra time. It saves money as well work gets done in due time. The corporates keep laddus in both hands. They kill two birds with one stone - एक तीर से दो शिकार.
If such a balance is not good for teachers, who live a rather leisure life, how can it be possible for those who are in pursuit of creative geniousness.
The play should have shown the Director happy and satisfied in his lonesomeness, celebrating solitude, rather than regretting and desiring for family life. Come what may, the Show Must Go On!

The Play about the Play

There is reference to 'Method Acting' and Stanislavski's system. We understand that the play wanted to say that the Digdarshak, the protagonist has lived what he was doing. Method Acting is not about 'art of representation'  but 'art of experiencing'. The play successfully represents the experience of the protagonist. Method acting is painful. It demands the actor to live in the character, days and nights. The actor is supposed to be evaporated like dew drop in the cloud of character. This is yet times harmful to the actor. It becomes difficult to come out of character even after the play. The protagonist of the play is suffering from these symptoms of Method Acting. There should have been a few more lines about this - but as it is said that true art lies in subtlety, the play achieves greater heights by not 'talking' but 'showing' it in action.
This play falls under the genre of the 'art about the art'. Luigi Pirandello's Six Characters in Search of an Author' or 'Hamlet's scene where Hamlet guides actors about acting are examples of this genre. In such genres, the art itself becomes the criticism. The thin line between the creative writing and critical is blurred in such forms. The audience are enriched with both the aesthetic beauty / delight of an art and also learn how to appreciate art.

Künstlerroman , (German: “artist’s novel”), class of Bildungsroman, or apprenticeship novel, that deals with the youth and development of an individual who becomes—or is on the threshold of becoming—a painter, musician, or poet. The classic example is James Joyce’s Portrait of the Artist as a Young Man(1916). The type originated in the period of German Romanticism with Ludwig Tieck’s Franz Sternbalds Wanderungen (1798; “Franz Sternbald’s Wanderings”). Later examples are Knut Hamsun’s Hunger (1890) and Thomas Wolfe’s Look Homeward, Angel (1929). Unlike many Bildungsroman, where the hero often dreams of becoming a great artist but settles for being a mere useful citizen, the Künstlerroman usually ends on a note of arrogant rejection of the commonplace life. (From Encyclopædia Britannica   https://www.britannica.com/art/Kunstlerroman).

This play has both these trajectories. The story of the Director was highly potential to be Kunstlerroman where he ends with arrogant rejection of the cinema life. However, the way he compromises is one of the weakest point in this trajectory. He should not have compromised. Uncompromising theatre director should have given greater heights to this play and his character.  The story of the Actor is that of Bildungsroman where he settles for being a mere useful Bollywood actor.

I am neither trained actor nor an authority to comment on the acting. These are observations based on impressionistic criticism. The impressions left on my psyche of the two actors is what i try to express. I do not want to be judgmental. However, i cannot feel the shiver or tremble of an old man, who is helpless and vulnerable, in the voice modulation of the Director, the protagonist. The young Actor was able to move swiftly in his role. The point that i want to make will be clear if you compare the same song sung by a rather young Shankar Mahadevan and old Santosh Anand. Listen - and feel the shiver in voice modulation of old Santosh Anand. This was missing in the acting of the Director!
Also concentrate on the lyrics. There is fascinating parallel with the theme of the play -

This is the play which is strongly recommended to be watched. Congratulations to Writer Priyam Jani and director Rishit Jhaveri for this amazing experience. The play engrossed so deeply that the audience craved for the play to go on and on. The play ended with a hunger among the audience to want something more! The play took some time (10 minutes or so) to build an environment. But once it created an aura, it has magical sway. It engulfs. The play ends but the thoughts clicked by the play does not go out of us. It keeps hovering and buzzing like a bee in a bonnet.

Want to watch the play?