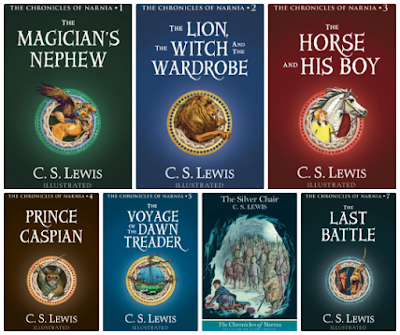 The Chronicles of Narnia

If Huxley's fiction created utopian and dystopian words based on a vision of technology, the work of the Anglo-Irish C.S. Lewis (1898-1963) offered a fantasy created out of a more religious vision. Lewis, highly regards Milton scholar, medievalist(he was the Chair of Medieval and Renaissance English at the University of Cambridge) and critic, after a late return to Christianity (partly under the influence of his friend, J.R.R. Tolkien), created 'The Chronicles of Narnia' (1950-56).
The Narnia takes are in seven books - their order has been a matter of some debate - and deal with the adventures of a group of children who visit a magical island, Narnia. Though Christian in theme and intention, there are influences from Celtic and Greco-Roman mythologies. In 'The Lion, the Witch, and the Wardrobe, the first of the epic cycle, Peter, Susan, Edmund, and Lucy Pevensie stumble into Narnia. The evil witch, called simply the White Witch, is thwarted as the children befriend the great lion, Aslan. In book II (Prince Caspian) an evil king has acquired control of Narnia. How the children help the good Prince Caspian to fight and win against Telmar is the main story here. The Voyage of the Dawn Treader takes Edmund and Lucy Pevensie, and their cousin Eustace Scrubb, on a voyage with Prince Caspian to find and rescue the seven lords. In The Silver Chair, Aslan calls Eustace and his friend Jill to help him find Prince Rilian and rescue him from the Emerald Witch. Bree (a talking horse) and Shasta plan to escape from their country, somewhere south of Narnia in The Horse and his Boy. The Pevensie children and Aslan thwart the attempts of the Calormenes to conquer Narnia. In The Magician's Nephew, Lewis maps the origin of Narnia, even as other children enter the place. In The Last Battle there is a false Aslan. The last volume ends Narnia itself. Just when the Calormenes are set to take over Narnia - the result of machinations by Swift the Ape and Puzzle the Donkey - Aslan, Eustace and Jill enable a fight against the Satanic forces. Aslan ends Narnia and selects all those loyal to him to another world. It is also revealed that Narnia is i fact England and that the 'travellers' in Narnia are actually dead and they have been reunited in a perfect world.
Controversies over the use of Christian doctrines and symbols (such as the lion image) and Lewis's problematic presentation of Susan Pevensie (whose unflattering portrayal that highlighted her interest in cosmetics and by extension, her physical appearance and sexuality, was critiqued by two of the major children's authors Philip Pullman and J K Rowling) have continued.

The Lord of the Rings

The most enduring fantasy work produced in 20th century literature is surely 'The Lord of the Rings' (1954-5), prefigured, at least in terms of its characters, in 'The Hobbit' (1937). JRR Tolkien (1892-1973), a professor of poetry at Oxford, was influenced by Greek and Finnish mythologies. The Bible (Tolkien admitted that his was a Christian work) and old English writings (specifically Beowulf, on which Tolkien lectured) are discernable influences on Tolkien's own work.
Religion in The Chronicles of Narnia

CS Lewis did not originally set out to incorporate Christian theological concepts into his Narnia stories; it is something that occurred as he wrote them. As he wrote in his essay Sometimes Fairy Stories May Say Best What's To Be Said (1956):

Some people seem to think that I began by asking myself how I could say something about Christianity to children; then fixed on the fairy tale as an instrument, then collected information about child psychology and decided what age group I’d write for; then drew up a list of basic Christian truths and hammered out 'allegories' to embody them. This is all pure moonshine. I couldn’t write in that way. It all began with images; a faun carrying an umbrella, a queen on a sledge, a magnificent lion. At first there wasn't anything Christian about them; that element pushed itself in of its own accord.

Lewis, an expert on the subject of allegory and the author of The Allegory of Love, maintained that the Chronicles were not allegory on the basis that there is no one-to-one correspondence between characters and events in the books, and figures and events in Christian doctrine. He preferred to call the Christian aspects of them "suppositional". This indicates Lewis' view of Narnia as a fictional parallel universe. As Lewis wrote in a letter to a Mrs Hook in December 1958:

If Aslan represented the immaterial Deity in the same way in which Giant Despair [a character in The Pilgrim's Progress] represents despair, he would be an allegorical figure. In reality, however, he is an invention giving an imaginary answer to the question, 'What might Christ become like if there really were a world like Narnia, and He chose to be incarnate and die and rise again in that world as He actually has done in ours?' This is not allegory at all. (Wikipedia)