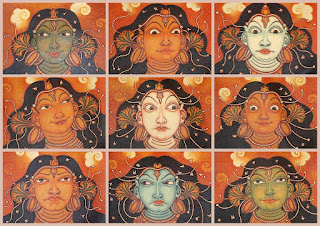 According to an entry in Encyclopaedia Britannica,

rasa, (Sanskrit: “essence,” “taste,” or “flavour,” literally “sap” or “juice”) Indian concept of aesthetic flavour, an essential element of any work of visual, literary, or performing art that can only be suggested, not described. It is a kind of contemplative abstraction in which the inwardness of human feelings suffuses the surrounding world of embodied forms.

The theory of rasa is attributed to Bharata, a sage-priest who may have lived sometime between the 1st century BCE and the 3rd century CE. It was developed by the rhetorician and philosopher Abhinavagupta (c. 1000), who applied it to all varieties of theatre and poetry. The principal human feelings, according to Bharata, are delight, laughter, sorrow, anger, energy, fear, disgust, heroism, and astonishment, all of which may be recast in contemplative form as the various rasas: erotic, comic, pathetic, furious, heroic, terrible, odious, marvelous, and quietistic. These rasas comprise the components of aesthetic experience. The power to taste rasa is a reward for merit in some previous existence.

Rasas are created by bhavas the state of mind.
The rasa theory has a dedicated section (Chapter 6) in the Sanskrit text Natya Shastra, an ancient scripture from the 1st millennium BCE attributed to Bharata Muni. However, its most complete exposition in drama, songs and other performance arts is found in the works of the Kashmiri Shaivite philosopher Abhinavagupta (c. 1000 CE), demonstrating the persistence of a long-standing aesthetic tradition of ancient India. According to the Rasa theory of the Natya Shastra, entertainment is a desired effect of performance arts but not the primary goal, and the primary goal is to transport the audience into another parallel reality, full of wonder and bliss, where they experience the essence of their own consciousness, and reflect on spiritual and moral questions.
Although the concept of rasa is fundamental to many forms of Indian arts including dance, music, theatre, painting, sculpture, and literature, the interpretation and implementation of a particular rasa differs between different styles and schools (Wikipedia Rasa).
The word rasa appears in ancient Vedic literature. In Rigveda, it connotes a liquid, an extract and flavor. In Atharvaveda, rasa in many contexts means "taste", and also the sense of "the sap of grain". According to Daniel Meyer-Dinkgräfe – a professor of Drama, rasa in the Upanishads refers to the "essence, self-luminous consciousness, quintessence" but also "taste" in some contexts. In post-Vedic literature, the word generally connotes "extract, essence, juice or tasty liquid".
Rasa in an aesthetic sense is suggested in the Vedic literature, but the oldest surviving manuscripts, with the rasa theory of Hinduism, are of Natya Shastra. The Aitareya Brahmana in chapter 6, for example, states:
Now (he) glorifies the arts,
the arts are refinement of the self (atma-samskrti).
With these the worshipper recreates his self,
that is made of rhythms, meters.
The Sanskrit text Natya shastra presents the rasa theory in Chapter 6, a text attributed to Bharata Muni. The text begins its discussion with a sutra called in Indian aesthetics as the rasa sutra:
Rasa is produced from a combination of Determinants (vibhava), Consequents (anubhava) and Transitory States (vyabhicaribhava).
According to the Natya shastra, the goals of theatre are to empower aesthetic experience and deliver emotional rasa. The text states that the aim of art is manifold. In many cases, it aims to produce repose and relief for those exhausted with labor, or distraught with grief, or laden with misery, or struck by austere times. Yet entertainment is an effect, but not the primary goal of arts according to Natya shastra. The primary goal is to create rasa so as to lift and transport the spectators, unto the expression of ultimate reality and transcendent values.
The Abhinavabhāratī is the most studied commentary on Natyasastra, written by Abhinavagupta (950–1020 CE), who referred to Natyasastra also as the Natyaveda.[18][19] Abhinavagupta's analysis of Natyasastra is notable for its extensive discussion of aesthetic and ontological questions. According to Abhinavagupta, the success of an artistic performance is measured not by the reviews, awards or recognition the production receives, but only when it is performed with skilled precision, devoted faith and pure concentration such that the artist gets the audience emotionally absorbed into the art and immerses the spectator with pure joy of rasa experience.

Bharata Muni enunciated the eight Rasas in the Nātyasāstra, an ancient Sanskrit text of dramatic theory and other performance arts, written between 200 BC and 200 AD.[4] In the Indian performing arts, a rasa is a sentiment or emotion evoked in each member of the audience by the art. The Natya Shastra mentions six rasa in one section, but in the dedicated section on rasa it states and discusses eight primary rasa.[12][21] Each rasa, according to Nātyasāstra, has a presiding deity and a specific colour. There are 4 pairs of rasas. For instance, Hāsya arises out of Sringara. The Aura of a frightened person is black, and the aura of an angry person is red. Bharata Muni established the following:[22]

A ninth rasa was added by later authors. This addition had to undergo a good deal of struggle between the sixth and the tenth centuries, before it could be accepted by the majority of the Alankarikas, and the expression "Navarasa" (the nine rasas), could come into vogue.

Shānta-rasa functions as an equal member of the set of rasas, but it is simultaneously distinct as being the most clear form of aesthetic bliss. Abhinavagupta likens it to the string of a jeweled necklace; while it may not be the most appealing for most people, it is the string that gives form to the necklace, allowing the jewels of the other eight rasas to be relished. Relishing the rasas and particularly shānta-rasa is hinted as being as-good-as but never-equal-to the bliss of Self-realization experienced by yogis (Source Wikipedia).