Ministerial Endorsement: Will PM demand an apology as Sushma Swaraj once did?

Should Minister in Office endorse private products or services?

Will Prime Minister Narendra Modi demand an apology from Reliance Jio for using his photographs in the launching advertisement?

But should he demand an apology?

The image 1 shows that Reliance Jio gave front page full page ad in leading national news papers with PM Narendra Modi's photo. It seems that PM is endorsing the product.
Well, there may be nothing wrong in this. But the question people may ask is will PM be accountable for the products / services unobjectionably endorsed with his photographs or quotes?
We question this because we are debating an issue of making brand ambassadors accountable for the products and services endorsed by them. Read this. (The issue was in limelight because of Maggie ban and Mahendrasinh Dhoni)
Now, as many of our parliamentarians are willing to make celebrities liable for the products / services they endorse, shall we not question if Ministers (holding key positions in decision making) do not object to private companies making use of their quote or photographs in their advertisement? And if they do not object can we make them also accountable as willy-nilly they are giving consent to it.

Well, this reminds of 2003. When Coke and Pepsi were facing charges of pesticides in the cold-drinks, there was nationwide hullabaloo. The image 2 is from The Times of India of 3 August 2003. The Bajpayee government was under tremendous pressure. After several checks in national and international laboratories, the then Health and Family Welfare Minister Sushma Swaraj made a statement in Parliament of India that Pepsi and Coke are SAFE. The statement was made on 21st August 2003 in the Lok Sabha: ". . . all these (soft drinks) are well within the safety limits. . . .".
On 22nd August 2003, Pepsi smartly used this quote and gave half page advertisement in leading news papers. Pepsi directly quoted Health and Family Welfare Minister in the ad. See Image 3. The ad said that the Minister's faith in the product in restored and refreshed.

Somehow, this did not go well with the minister and she objected. May be she objected on personal moral grounds. May be she thought is not advisable for company to use Minister to endorse the product. But that was a classic case. It remains as a lighthouse to guide us in such matters of ministerial endorsement of private services and products.
The company has give yet another ad on the same spot in all newspapers and APOLOGIZE. See image 4 below.
Well, can we expect similar sort of action from Prime Minister? I am looking forward to see that very soon PMO will ask for an apology from Reliance Jio for making use of PM's photograph in the advertisement.

Here are some of the news regarding the controversy:
1) PM endorsement is Wrong
2) Isn't it wrong?
3) Right or Wrong: Debate is On


Why does this become so controversial? 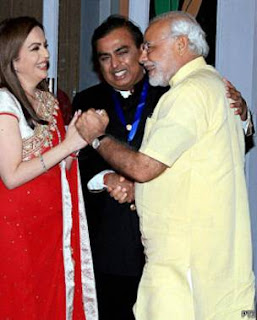