From the desk of the Head of the Department

A Meme is an interesting ‘sign’ of communication. The word meme is a neologism coined by Richard Dawkins. It originated from Dawkins's 1976 book The Selfish Gene.

Richard Dawkins likened the process by which memes survive and change through the evolution of culture to the natural selection of genes in biological evolution. Dawkins defined the meme as a unit of cultural transmission, or a unit of imitation and replication, but later definitions would vary.

Merriam-Webster dictionary defined - A meme is an idea, behaviour, or style that spreads by means of imitation from person to person within a culture—often with the aim of conveying a particular phenomenon, theme, or meaning represented by the meme.

Gordon Graham states in ‘Genes: A Philosophical Inquiry’ that “A meme acts as a unit for carrying cultural ideas, symbols, or practices, that can be transmitted from one mind to another through writing, speech, gestures, rituals, or other imitable phenomena with a mimicked theme. Supporters of the concept regard memes as cultural analogues to genes in that they self-replicate, mutate, and respond to selective pressures. 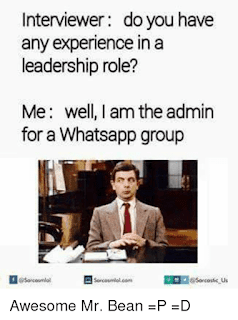 Well, the purpose of this explanation of ‘meme’ is to understand how funny-looking photograph of Mr. Bean with a dialogue between interviewer and ‘me’ (whoever reads this) is so significant meme in the times of leadership crisis.

When observed from the distant hill-top position with a hind sight, every passing-out batch makes me think something vividly and yet in very general terms i.e. not specific about individual students, but about entire ‘class’ / ‘group’. The batch passing out in 2020 makes me re-think about the qualities and characteristics of leadership. This meme acts as a unit for carrying leadership ideas, symbols and practices, that can be transmitted form one mind to another through behavioural patterns imitated by others, supported and self-replicated and responded in similar fashion. The contemporary phenomenon represented by this meme is exactly what was experienced in last year. The meme speaks about leadership crisis in real-life situations. Social media platforms like WhatsApp is just a means for communication. Communication is a very significant strategic tool for good leadership. However, it shall be carried out in real-life situation, lest it should remain only at communication level which does not materialize in real life situation.

When it comes to developing leadership qualities among students, we follow the model of ‘Emergent Leadership’. The success story of Google is all about ‘emergent leadership. We have also achieved significant positive results in past with the similar model of leadership wherein there is little interference by teachers and students are free to display leadership qualities.

I would like to borrow views of Stuart R. Levine published as The Skills Required for Emergent Leadership on cutimes.com. He defined Emergent Leadership as ‘It is a type of leadership in which a group member is not appointed or elected to the leadership role; rather, leadership develops over time as a result of the group’s interaction. He concluded that it is not grades that matters but ‘predictive of success were adeptness with the “soft skills” of leadership, humility, collaboration and loving to learn, unlearn and re-learn… surprisingly, even the expertise was not a useful predictor. For every job at Google, general cognitive ability as the primary attribute of success and expertise as one of the least important. Google discovered that emergent leadership skills – including a desire to learn and the ability to process and integrate disparate bits of information for solutions and insights – were more important than content knowledge.

Somehow, I don’t know why, but I get such vibes that the passing out batch was lacking the characteristics of emergent leadership. I have never felt an urge to write in Memorabilia about ‘the lack’. I prefer to write about what positive attributes were ‘present’ among the class of students passing out. Somehow, again I don’t know why, I feel – let me take this last opportunity to teach something so significant as life skills – emergent leadership!

Many students are very talented in their respective areas of interest. . . . . But because they lacked the attribute of emergent leadership, they failed to lead the group to achieve something significant as a class.

Many of the students were having very unique skills, attributes, characteristics, creative power and passion for life. Mentioning some of their uniqueness, not as per the attributes but alphabetically, I would like to mention that Alisha - a passion for acting in theatre & TV; Ashish - informed about his passion for badminton; Bhavnesh - shown good capacity to critically think and articulate in equally good elocution; Dhaval - good drafting style in Gujarati language, passion for photo-videography, media and also an insight for aesthetic designs; Dipti - displayed hunger for deep learning; Divya - capacity to do hard work; Hetal - a passion for sports; Hina was good learner; Jeel displayed attitude for research based learning; Kailas - a knack for adventure sports; Krishna displayed a capacity to lead; Lalji was one of the most sincere in learning and showed ability to unlearn & relearn; Minkal - displayed capacity to learn and articulate learning for exam purpose; Mitalba was slow in traditional classroom learning but was better in digital learning, especially in lab sessions; Nasim - developed an insight to read real life through the lenses of literature; Nikita – displayed tremendous improvement in last semester; Prakruti - good command over language and was able to articulate understanding in classroom discussions; Prinjal - been very good in working hard; Ruchita - shown initial spark of passion for learning and leading; Urvashi - good ability for sports; Vidhya was good in celebration and cultural events; and Vishva had good language commands, ability to be creative and a leader. Avni, Jetal, Jyotiba, mansi, Monika, Nirali, Rajdip, Richa, and Sejal were doing their bit as good students and even helping others in various activities.

All these students had talents to make it larger than life; make something historical; make an indelible mark. Somehow, that did not happen as I imagined or expected from them. And so, when I reflect back on their endeavours, attempts, talents, attributes and ability to perform, I feel they lacked something known as ‘Emergent Leadership’ - a desire to learn and the ability to process and integrate disparate bits of information for solutions and insights – were more important than content knowledge.

The lack of emergent leadership leads to the corrosion of an ability to communicate effectively also. If the students of literature (humanities) lack the ability to communicate, to share, to speak, to opine, to contribute, or to disseminate their learning, reading, research and interpretations, what happens is very tragic for entire discipline of humanities. We should always remember what Richard Altick and John Fenstermaker said about the dire condition of Humanities in the era of STEM: “If the humanities, including the study of literature, are in perennial crisis – more so at the present moment, perhaps, than ever before – and the outlook for their survival grim, blame must lie as heavily on us, their appointed agents, for our lack of enterprise, as on the supposed unreceptiveness of the prospective consumers. (Thus), it is our responsibility to seize every opportunity to communicate with the lay audience, as in book reviews or in articles and essays in the popular press (read social media) on history, biography, and culture (and to make such opportunities where they do not exist). Our contribution as scholars in this regard is only a slight modification of our essentially two-fold task in the classroom: to educate students at all levels to read, write, and think, developing in them the intellectually curious habit of mind that casts a disinterested eye over all important issues, appreciating their complexities; and to lead students by extensive reading and critical analysis of recognized writers and thinkers, ancient and contemporary, inside and outside the mainstream, to seek, in Matthew Arnold’s words, “the best that is known and thought in the world” for the purpose of creating in their own lives a “current of new and fresh ideas” appropriate in this, our time.”

We, at Department of English, strive hard to cultivate the habits of observing the process rather than the product; to nurture the habit of reflection, ponder upon everything we do; to habituate mind to question, to examine and to test before believing into anything – and above all, write about it, make it visible to the people in the world. We, the agents of literature / humanities, have to snatch every opportunity we get and display emergent leadership qualities; and be visible to the world by sharing our learning, reading, research & interpretations.

If these points are pondered upon, I hope, the passing out students will be able to shine out wherever and in whatsoever position they are.

This ‘Memorabilia 2020’ is an evidence of their incredible talent. Thanks to Committee Leaders for their reports. The Documentation Committee deserves an applaud for all the editing work. The design work is done by Dhaval.

Best wishes to all the passing out students for the future of their dreams and desire!
- Dilip Barad