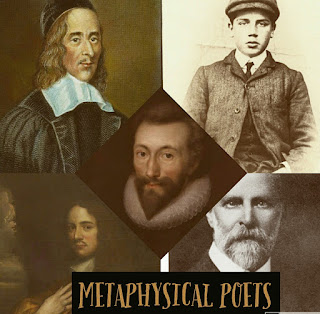 Metaphysical poet, any of the poets in 17th-century England who inclined to the personal and intellectual complexity and concentration that is displayed in the poetry of John Donne, the chief of the Metaphysicals. Others include Henry Vaughan, Andrew Marvell, John Cleveland, and Abraham Cowley as well as, to a lesser extent, George Herbert and Richard Crashaw.

Their work is a blend of emotion and intellectual ingenuity, characterized by conceit or “wit”—that is, by the sometimes violent yoking together of apparently unconnected ideas and things so that the reader is startled out of his complacency and forced to think through the argument of the poem. Metaphysical poetry is less concerned with expressing feeling than with analyzing it, with the poet exploring the recesses of his consciousness. The boldness of the literary devices used—especially obliquity, irony, and paradox—are often reinforced by a dramatic directness of language and by rhythms derived from that of living speech.

Esteem for Metaphysical poetry never stood higher than in the 1930s and ’40s, largely because of T.S. Eliot’s influential essay “The Metaphysical Poets” (1921), a review of Herbert J.C. Grierson’s anthology Metaphysical Lyrics & Poems of the Seventeenth Century. In this essay Eliot argued that the works of these men embody a fusion of thought and feeling that later poets were unable to achieve because of a “dissociation of sensibility,” which resulted in works that were either intellectual or emotional but not both at once. In their own time, however, the epithet “metaphysical” was used pejoratively: in 1630 the Scottish poet William Drummond of Hawthornden objected to those of his contemporaries who attempted to “abstract poetry to metaphysical ideas and scholastic quiddities.” At the end of the century, John Dryden censured Donne for affecting “the metaphysics” and for perplexing “the minds of the fair sex with nice speculations of philosophy when he should engage their hearts . . . with the softnesses of love.” Samuel Johnson, in referring to the learning that their poetry displays, also dubbed them “the metaphysical poets,” and the term has continued in use ever since. Eliot’s adoption of the label as a term of praise is arguably a better guide to his personal aspirations about his own poetry than to the Metaphysical poets themselves; his use of metaphysical underestimates these poets’ debt to lyrical and socially engaged verse. Nonetheless, the term is useful for identifying the often-intellectual character of their writing. (J.E. Luebering)

The term Metaphysical poets was coined by the critic Samuel Johnson to describe a loose group of 17th-century English poets whose work was characterised by the inventive use of conceits, and by a greater emphasis on the spoken rather than lyrical quality of their verse. These poets were not formally affiliated and few were highly regarded until 20th century attention established their importance. (Click here to read more)

Analysis of 'The Sun Rising'

Analysis of 'Ecstasy' - Another analysis

Analysis of 'The Collar'

Analysis of 'To his Coy Mistress'