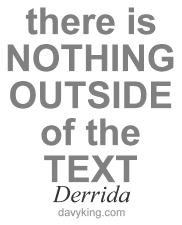 Jacques Derrida:
“Structure Sign and Play in the Discourse of the Human Sciences” 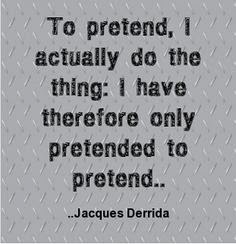 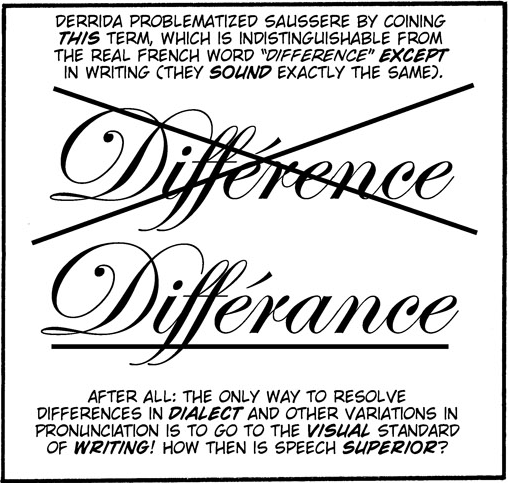 Traditional Western metaphysics advances on the basis of critique. You find the weakness in your antagonist's argument, and by this means show it to be false. In the tradition of Pope and Swift, you
may then ridicule the argument, thereby persuading your reader to take your side against your antagonist. You go on to replace the previous position with your own views, which are then subject to
critique in their turn. Deconstruction, however, is not critique. Derrida treats Levi-Strauss with respect, and his project is not to persuade us to repudiate Saussure, still less to ridicule him (though there are moments of comedy in his account of the sermon against the sin of writing delivered by the moralist from Geneva). Instead, he points out that Saussure's own book does not sustain the opposition between speech and writing it takes for granted and reiterates. On the contrary, the Course records (as an outrage) the invasion of the rejected writing into speech itself. Spelling, Saussure declares with horror, is changing pronunciation.

Let us conclude with M. H. Abram’s observation in ‘How to do things with texts?’: - “Derrida emphasizes that to deconstruct is not to destroy; that his task is to “dismantle the metaphysical and rhetorical structures” operative in a text “not in order to reject or discard them, but to reconstitute them in another way”; - that he puts into question the “search for the signified not annul it, but to understand it within a system to which such a reading is blind.”

What post-structuralist critics do?

1. They 'read the text against itself so as to expose what might be thought of as the 'textual
subconscious', where meanings are expressed which may be directly contrary to the surface meaning.
2. They fix upon the surface features of the words - similarities in sound, the root meanings of words, a 'dead' (or dying) metaphor and bring these to the foreground, so that they become crucial to the overall meaning.
3. They seek to show that the text is characterized by disunity rather than unity.
4. They concentrate on a single passage and analyze it so intensively that it becomes impossible to
sustain a 'univocal' reading and the language explodes into 'multiplicities of meaning'.
5. They look for shifts and breaks of various kinds in the text and see these as evidence of what is
repressed or glossed over or passed over in silence by the text. These discontinuities are sometimes called 'fault-lines', a geological metaphor referring to the breaks in rock formations which give evidence of previous activity and movement.
6. Watch this example to understand 'deconstructive reading of a poem'