Are they connected? Is there the chain of events interlinked with each other?

Is human Karma the 'Cause' of the natural calamity, the 'Effect'?

These questions are obvious as people connect the happening (Earthquake) with recently celebrated Hindu Goddess Gadhimai festival in Nepal. It is a sacrificial ritual that is held every 5 years at the Gadhimai Temple of Bariyarpur, in Bara District, about 100 miles (160 km) south of the capital Kathmandu in the southern Nepal, near the Indo-Nepal open border, adjacent to Bihar. It is primarily celebrated by Madheshi tribal people and Bihari people. The event involves the large scale sacrificial slaughter of animalsincluding water buffaloes, pigs, goats, chicken, rats, and pigeons – with the goal of pleasing Gadhimai, the goddess of power. (Source: Wikipedia)

These images speak louder than what words can express. . .  or can never express. 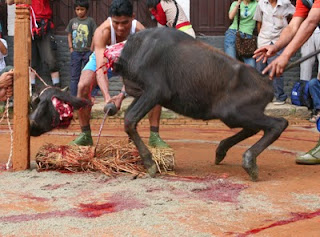 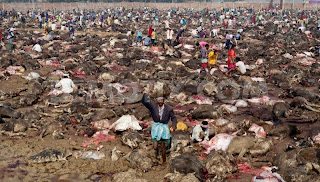 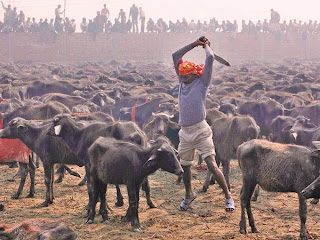 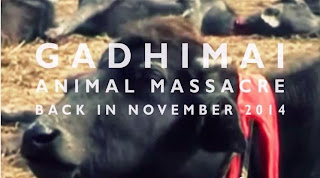 This event - religious celebration of sacrifice - was the cause of connecting Earthquake with Human Karma. It tries to say that Human beings kill animals and so Nature takes its revenge by killing human beings.
This is so absurd. It is absurd because those who are killed in natural calamity may not have sacrificed single animal. In fact, many of them would have stood against it. Those who would have sacrificed animals may be alive, happy and thanking goddess Gadhimai for keeping them safe in this natural calamity. It is also absurd because to say that it is revenge by God means that those who died are wrong doers. The 'Adharmi' - those with bad Karma - and they got the fruits of their Karma under the debris of temples, homes and similar human constructions. 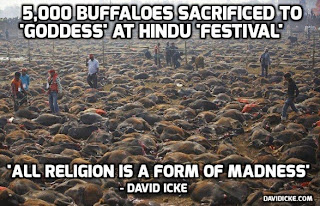 This reading of human Karma and natural calamities also proves the point that we believe there is somebody (i.e. God) up there keeping records of each and every act / Karma of human beings. But then why does he always go so wrong in this record keeping and setting the score. It is the poor who get to pay the price of over all human crime, if these rituals are considered so. Does it mean that being poor itself is the fruit of bad Karma? Does it mean that being rich is in itself the fruit of good Karma?

As the philosopher David Hume (echoing Epicurus) put it in 1776: "Is God willing to prevent evil, but not able? Then he is impotent. Is he able, but not willing? Then he is malevolent. Is he both able and willing? Whence then is evil?" (from news.bbc.co.uk).

Logically speaking, the entire idea of human Karma, natural calamities, God as Judge and his rightful judgement in killing poor human being takes us no where.

Yes, it should be admitted that human Karma like emission of polluting chemicals/gases in air, water, earth is harmful. We harm our natural surrounding and then we get acid rain, hail storm, unseasonal rains, extreme summers and winters etc. There is direct connection with human Karma and Natural pattern. But that is controlled by humans, there is nobody like God who take notes in his book of accounts and then settles the score.

Earth is the only Home for human beings. We have to take care of it. But the universe is so large and expanding that what so ever we do, it seems to have no effect. We do not know how planting a tree will really save life of Earth. Say for instance, if there are no trees left, there won't be Oxygen to breath. In that case, either out lungs will adapt to live by other Gas or will perish to give space to the species who can live without O2. I do not recall where but i read that Oxygen was a poisonous gas, once. Those species ceased to exist and gave space to the species for whom O2 is not poisonous. What is to happen, as per law of Nature, is to happen. Yes, as per the law of Nature, not according the Karma and the keeper of Karma. Each and every planet and sun have their expiry date. They all move towards black hole. Slowly and steadily, all move towards destruction. That is law of Nature: 'All natural beings constantly move towards destruction, death, end.". Every day, we take a tiny step, not away form death, but towards death.

If we see larger picture, we find that entire Himalayan range the 'Paradise on Earth' is "gift" of Earthquake. The movement of Earthen-plates beneath the layer of Earth pressed pressed and the highest mountain range emerged. It is growing higher and higher, with this movement. See the infographics, below.

Nature has its own way of functioning. It cannot be affected by human Karma.  There are innumerable planets n stars in universe. Every moment, some sort of volcano, earthquake n falling of stars (death of stars) are happening. There arr no humans there? Whose karma is it? There was no such killing of animals in Gujarat - Kutch in 2001, and yet earthquake killed so many!

Even if people stop doing anything, earthquakes are bound to happen.

The source of these images is NewsFlick.com. 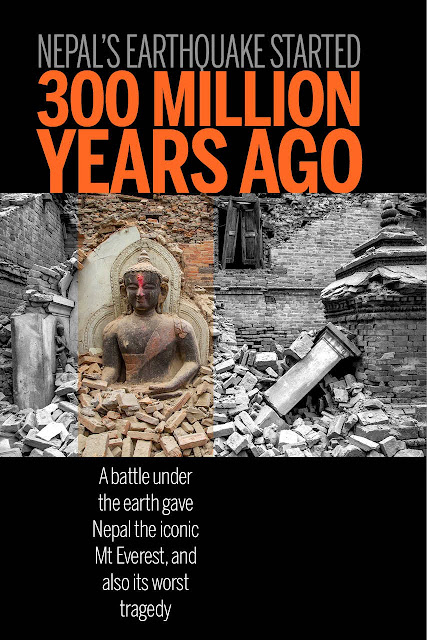 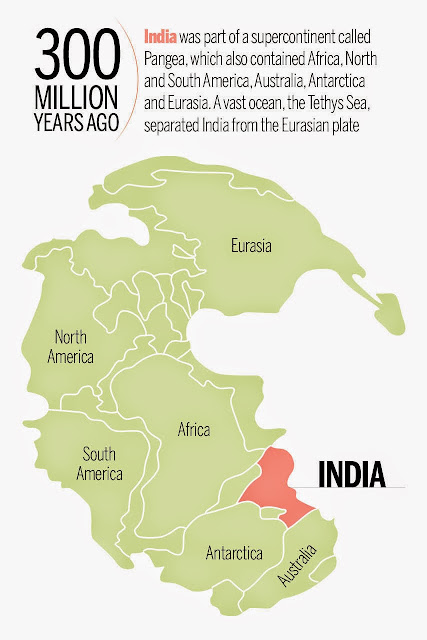 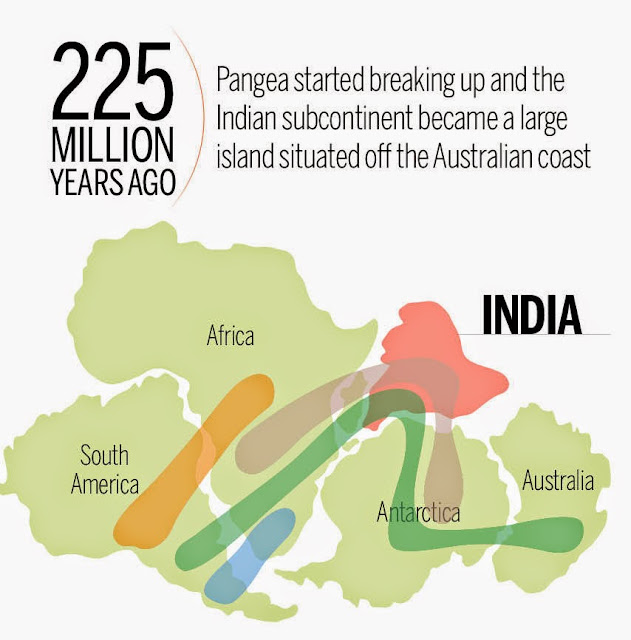 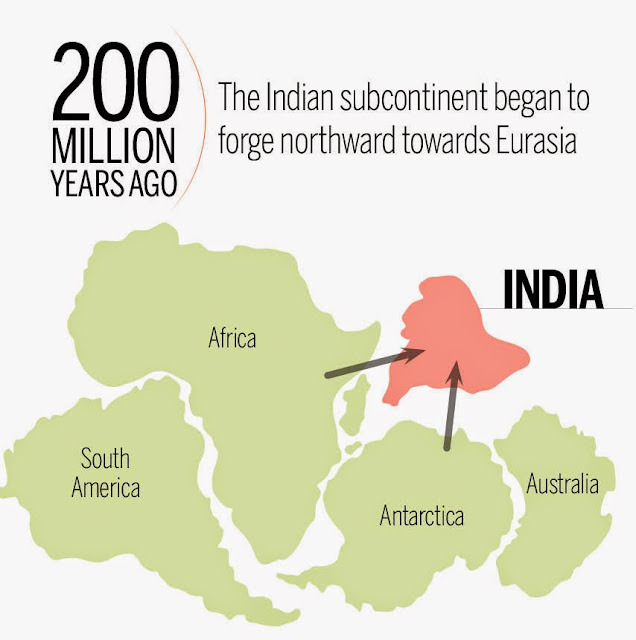 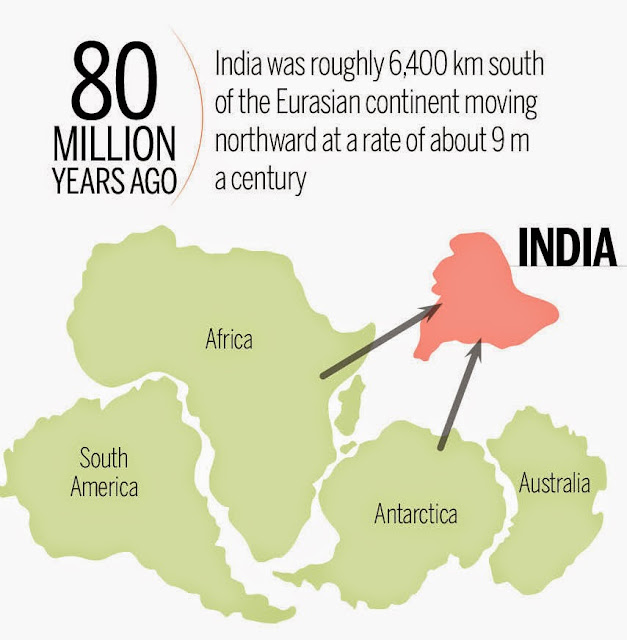 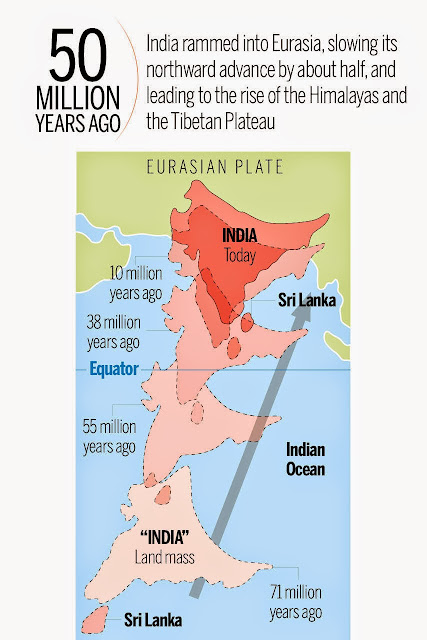 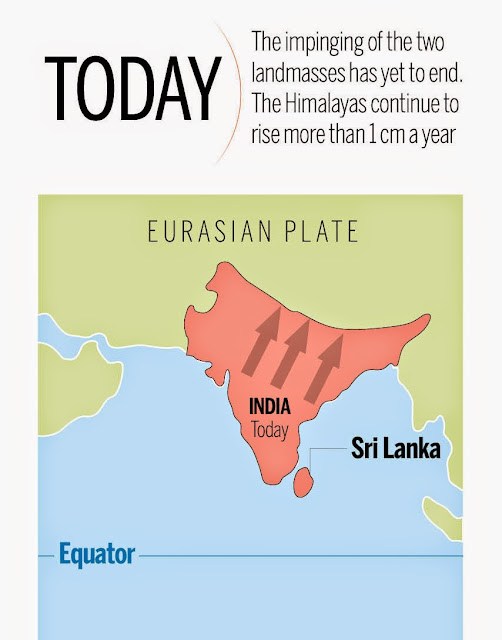 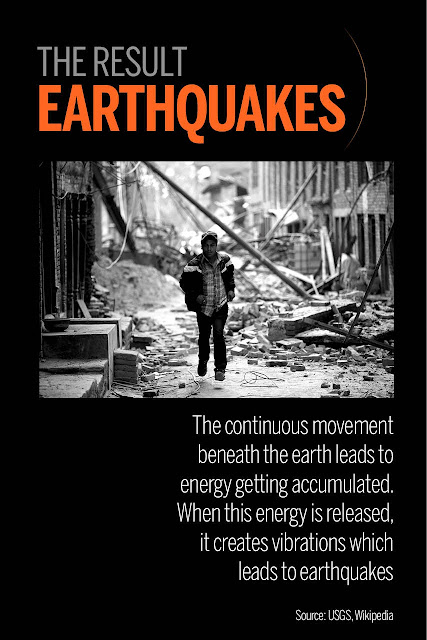 All these millions of years of existence of planet Earth, earthquakes are regular part of natural phenomenon. Religion is the phenomenon that came into existence in just some thousands of years. Even when no rituals of sacrificing lives were carried out, natural calamities happen to happen. How can we connect these natural happenstance with human Karma? Aren't we as tiny as ants in this universe or even tinier than that? Are ant's Karma affecting out lives? In similar relation, how can we be so boastful of our Karma that it may have any effect on Nature? Isn't it just human arrogance that we try to see everything in relation to us. We put ourselves at the center of entire existence as if Nature has created everything for us. How many million years shall we require to understand that human beings are not he center of this universe? Our huge 'Mother' Earth is merely a speck of dust in the universe, almost invisible. I have always liked the analogy of 'self-existent' (swyambhu) - 'self- manifestation' of Louse (plural Lice), esp. head lice. Out head is almost similar to Earth. Enough water (sweat), layer like land which can be dug to get blood for existence. Who cares for the good or bad Karma of lice. Just a movement of lice-comb or an anti-dandruff shampoo (tsunami) can wipe off entire existence of lice from the head. . .  and that may happen on planet Earth. Several times, Earth had been wiped-off of human race. Like lice, we bounced back to our existence. There is something phoenix-like in our DNA that we rise again and again from the ashes (DNA). That's what is called the indomitable spirit of species - be it vegetation, animal or human. This sort of consciousness of our existnece makes us ready for the future. Shakespeare has righly said: "Readiness is all!". . . Baki sab (Karma, Karma-keeper, Karma-settler) bakwass . . . Rest is all stupidity!

An anecdote: Rabindranath Tagore and Mahatma Gandhi: On Earthquake

‪#‎RabindranathTagore‬'s rationality vs ‪#‎MahatmaGandhi‬'s religiosity.1934 Bihar Earthquake.Gandhi: "A man like me cannot but believe this earthquake is a divine chastisement sent by God for our sins" - in particular the sins of untouchability. "For me there is a
vital connection between the Bihar calamity and the untouchability campaign."
Tagore: He hated the epistemology implicit in seeing an earthquake as caused by ethical failure. "It is," he wrote, "all the more unfortunate because this kind of unscientific view of [natural] phenomena is too readily accepted by a large section of our countrymen."
(Source: http://www.nobelprize.org/nobel_prizes/literature/laureates/1913/tagore-article.html)